Facebook Cambridge Analytica Data Scandal: Everything you Need to Know

Ever since the beginning, all of us have loved Facebook. This social networking site has proved to be really beneficial to all of us. We have got to get connected to our friends and family members from different parts of the world within no time. We have given our personal information such as date of birth, gender, education and views of religion and politics but what if it is not safe? Ever imagined about it? Well, that has happened recently. Your personal data isn’t safe anymore. At any point of time, Facebook can invade your personal data.

Facebook even keeps a check on what articles you read, what are your favourites, what posts have you reposted and your likes. Facebook over the years, has been accused of mishandling of data. Currently, it has been found that the personal data of about 50 million Facebook users was invaded by Cambridge Analytica back in 2014 which was assigned for the campaign of Presidential elections for Trump. It formed about 33 percent of Facebook users in North America and 25 percent of the voters from the US.

The researchers (Aleksandr Kogan from Cambridge University) had created a personality quiz app which was downloaded by an approximate of 270,000 Facebook users who agreed to share their data. But they invaded into their profiles of the users without the consent of the users and took information from the profile of their friends. The data about these 50 million Facebook users was provided by kogan to Cambridge Analytica. Out of those 50 million, 30 million users’ data contained enough information to form their profile.

Cambridge Analytica used the data to create the psychographic and psychological message in order to predict and change the process of their voting. The whistleblower of Cambridge Analyica, Christopher Wylie told Observer, “We exploited Facebook to harvest millions of people’s profiles. And built models to exploit what we knew about them and target their inner demons. That was the basis the entire company was built on.”

Cambridge Analytica: Statements made by the concerned people

In a statement on March 17, The Vice President of Facebook and Deputy Counsel General, Paul Grewal said, “The claim that this is a data breach is completely false. Aleksandr Kogan requested and gained access to information from users who chose to sign up to his app, and everyone involved gave their consent.”

Mark Zuckerberg, the CEO of Facebook who had been silent on the matter spoke on 21st March. He is statement included a number of changes that were to be made. He said, “We have a responsibility to protect your data, and if we can’t then we don’t deserve to serve you.” He further added, “But it was also a breach of trust between Facebook and the people who share their data with us and expect us to protect it. We need to fix that.”

Despite all this, his statement lacked an apology and the reason about why wasn’t the action taken previously to stop it and delete the personal data. Many people said that Zuckerberg should resign. Digiming also reported that the Twitter hashtag #Deletefacebook had been trending since March 21st. 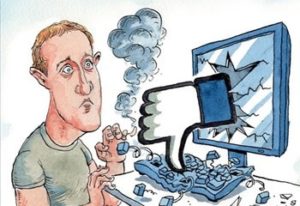 Ever since 2016 Presidential elections, facebook had been accused of mishandling of data and it called #Deletefacebook to be trending.

Ever since the scandal broke out, 11% of the stock of Facebook has gone down as of March 22. Mozilla and other advertisers added, “This news caused us to take a closer look at Facebook’s current default privacy settings given that we support the platform with our advertising dollars.”

The scandal is likely to affect the business of Facebook a lot.