WhatsApp has gained popularity ever since it was launched. The features of this messaging app have been evolving every day. First, it introduced the calling feature, then video call. Now, WhatsApp has taken everyone by storm by introducing the feature of group video calls. The announcement of this feature was made by WhatsApp in the annual F8 conference of Facebook’s developer conference this year in May.

All the users of WhatsApp both on iOS and Android platform will get to enjoy this feature. It will be supporting four people to video call at once. As per the estimations, the people spend about 2 billion minutes on call every day over WhatsApp, thus improving video call helped a lot.

The video call feature was introduced in WhatsApp back in 2016 but only two users were allowed to do so. The new update allows four people to do so. According to WhatsApp, this feature would also function in the slow conditions. Like the chats, the calls too will be end-to-end encrypted.

What other are saying: Whatsapp Features 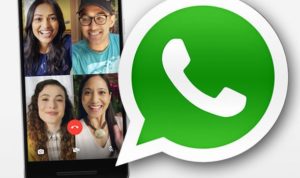 Four-way group video feature: How to start the video call?

To start the video call, you will first need to call one person and then move to adding the other person by clicking on the add button on the top-right corner. You will get to add another person, by clicking on the add recipient option. Their names will be distinguished by a comma. Similarly, you can add the other person too. As a result, four of you would get to enjoy the video call. Nonetheless, you will be required to download the updated version of the application to enjoy this feature.

WhatsApp’s blogpost read, “Group calls are always end-to-end encrypted, and we’ve designed calling to work reliably around the world in different network conditions. The feature is currently rolling out on the iPhone and Android versions of our app.”

WhatsApp has significantly introduced the forwarded label feature to avoid the problems rising in India due to the forwarded rumors. Whenever a message will be forwarded, it will have the label over it. This has been done to stop the fake news from spreading. It makes a difference between the circulated and forwarded content. WhatsApp was held by the government for all the “irresponsible messages” that were spreading rumors over the messaging platform. It was responsible for several explicit fights.

The IT Ministry said, “…the Government has directed (WhatsApp) that spread of such messages should be immediately contained through the application of appropriate technology. It has also been pointed out that such a platform cannot evade accountability and responsibility, especially when good technological inventions are abused by some miscreants who resort to provocative messages, which lead to spread of violence.”

To co-operate with the government, WhatsApp responded by saying, “We believe that false news, misinformation, and the spread of hoaxes are issues best tackled collectively by the government, civil society, and technology companies working together.”

WhatsApp has also introduced the helpline feature in three India languages (Gujarati, Marathi and Hindi) accompanied by English. This helpline is 24 hours available.

This new video call feature of WhatsApp is quite a feature we all had been waiting for. Nevertheless, Facebook allows the video call for 50 people, while Skype allows 25 and Snapchat allows 16 people.