Within few days, Samsung S9 will be available officially. Then only will we get to know what will be the price of the phone. As per reports, the estimated cost of Samsung S9 would be $100 more than the previous phones of the company. Hence, it is expected to be the most expensive Android phone.

The cost of iPhone X was $999, but it’s time that the users get ready for the most expensive Android phone ever before the launch of S9. After the success of Cat S60, Bullitt Group is back and is launching Cat S61 which is estimated to be priced at $999. 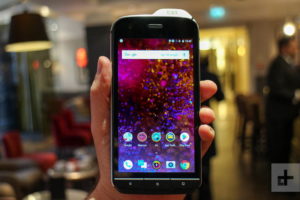 The official announcement of the phone was made on Thursday 22nd February, 2018. The announcement was made just a few days before the starting of Mobile World Congress, Barcelona. This phone is expected to have introduction of new features like thermal imaging camera and indoor air quality sensor.

Caterpillar S61 will be the heir to Cat S60. This phone will expected to be available in the markets from second quarter of the year and will be priced at around $999.

This is not it. The other features of the phone are equally mind blowing.

The display of Cat S61 will work with gloves as well as wet fingers. The thermal camera can measure temperatures ranging from -20 degree Centigrade to 400 degree Centigrade. It will also support the live streaming of thermal images.

The built sensor will quickly detect and alert the users about the level of rising air pollutants (Volatile Organic Compounds or VOCs) within the room that can possibly be caused by paint, carpets, furniture and other such things. It will also record the humidity and temperature level within the room.

It also has the feature of “laser assistance distance measurement”. This feature will help the user to measure the point-to-point distance up till 10 metres. You can also save the recorded data with image, and other measurements can also be recorded later on.

The phone comes with waterproof certification and aluminium reinforced frame. The phone has MIL Spec 810G rating along with IP68 dust.

Hence, it can be said that this Android phone of such high price will be long lasting.

There are no details regarding the price of Cat S61 in Australia but when converted from the price in UK, it will be sold at AU$1420. In the second quarter of the year, the phone will be available for 899 euros around Europe. The second quarter launch of the phone at US will be priced at $1115 whereas in the third quarter it will be available for $999. The price in India is estimated to be Rs 71990.

The phone may not look as good as Samsung Galaxy S9, but Cat S61 definitely has long lasting features for which the looks can be compromised.