India started its first T20 against South Africa by thrashing them by 28 runs. The match was held on Sunday at New Wanderers Stadium in Johannesburg. The target for South Africa was 204 but unfortunately they managed to score only 175 (all out). 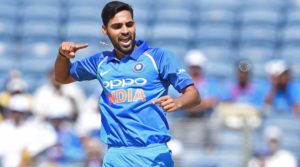 Bhuvneshwar Kumar took the best of his career as 5/24 in the first India vs SA T20 match. After this match, Bhuvneshwar Kumar became the first Indian pacer to have taken five wicket hauls in T20’s. Reeza Hendrick scored really well with 70 on 50 balls, but he too was out in the 18th over. This marked the collapse of the South African team in the match.

Bhuvi, took 4 wickets in  his last couple of overs which were, Hendricks, Chris Morris, Heinrich Klaasen and Dane Peterson. The scoreboard read 159/8 from 154/4. This was the end for South Africa in the game. 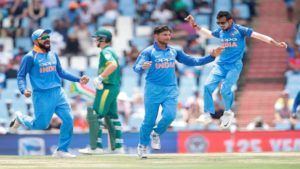 South Africa after a steady start lost 3 quick wickets in regular intervals of time. Hardik Pandya sent back David Miller at a mere score of 9 in the seventh over. The 4 over spell from Bhuvi was exceptional as he contained the South African batsmen and forced them to commit errors. Bhuvneshwar also took the wicket for JJ Smuts and sent him back at the score of 14. He also sent SA skipper JP Duminy in the fifth over. Their score came down to 38/2 in just five overs.

The highlight of the game was Bhuvneshwar taking 5 wickets. 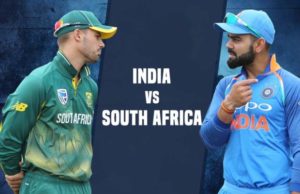 Shikhar Dhawan and Rohit Sharma were sent to open for India once again. Dhawan was quick in scoring his half century. He managed to score 72 runs of 39 balls. From the very start, India managed create that pressure and hence were able to score freely across the park. 7 sixes and 20 fours marked the innings for the Indian team.

Rohit Sharma, the hit machine batted really well in his short innings. A six and a four from Paterson in his very first over took the game away but as he was looking solid, SA managed to take his wicket when debutant pacer Junior Dala bowled him at 21 runs.

Suresh Raina scored a six and a four from the consecutive balls by Paterson. Raina scored 15 runs off 7 balls and was bowled out by Dala. By this time, India had already scored 50 runs in 4.3 overs.

Next came, India’s captain Virat Kohli and along with Dhawan they raised the score to 78/2. By 8.2 overs, India had scored 100 runs. Tabraiz Shamsi took Kohli’s wicket in the tenth over. Dhawan was knocked off by Andile Phehlukwayo in the 15th over.