Tribute to Sridevi and Shashi Kapoor at Oscars 2018

The first female Superstar of India, Sridevi and Shashi Kapoor were honoured at 90th Oscars in the “Memoriam” montage. This section honours all the stars or part of the industry that the cinematic industry had lost in the previous year.

Eddie Vedder performed the Tom Petty song, “In Memoriam” and during the song, the images of the stars were featured. James Bond star Sir Roger Moore, French star Jeanne Moreau actors Martin Landau and Harry Dean Stanton, actor and playwright Sam Shepard, and directors George Romero and Jonathan Demme were also remembered. Shashi Kapoor died last year in December due to illness and Sridevi died few weeks ago in Dubai due to drowning. 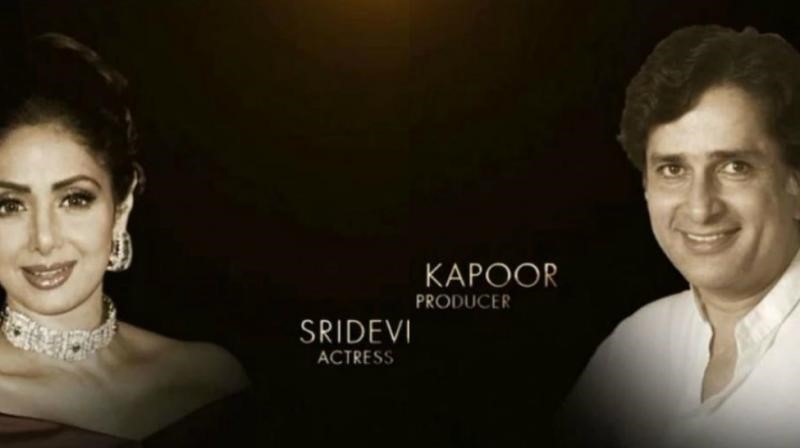 Tribute to Shashi Kapoor at Oscars

Shashi Kapoor was quite famous in the international film industry. He featured in many Merchant Ivory films of Sixties, Seventies and Eighties, the famous ones being The Householder, Shakespeare Wallah and Heat and Dust. He last featured in the Merchant Ivory film, In Custody of 1993. James Ivory, a part of the Merchant-Ivory collaborative team, won an Oscar for Best Adapted Screenplay for Call Me by Your Name.

Tribute to Sridevi at Oscars

Sridevi had starred in more than 300 films over her career of 50 years in various languages. Few of her brilliant and most appreciated movies were Sadma, Chandni, Mr. India and English Vinglish.

Both of them were Padma awardees and had been cremated with State Honour.

Rishi Kapoor and Varun Dhawan took to Twitter to thank Oscar for remembering both the legends, Sridevi and Shashi Kapoor.

Rishi Kapoor tweeted, “Oscars. Thank you for remembering Shashi Kapoor and Sridevi. Thrilled to see the name Raj Kapoor as the executive producer of the show. We are on the threshold of world cinema!” and Varun Dhawan tweeted, “So amazing to see the #oscars pay respect to #shashikapoor  and #sridevi #Oscar90”.

The Shape of Water grabbed a number of awards at this Oscar.