Rohit Sharma, the man of records has been in a terrific form in this India vs Sri-Lanka series. To add his tally of records, he became the first Indian batsmen to score two T-20 centuries. It has been just over a week, when he became the only batsmen to score 3 – double hundreds in ODI’s and now it seems this Hit-man is on a roll, which brings us to saying that he is another “Master Blaster in the Making”.

When it’s Hit-Man Sharma on the crease, you bet another record is in the line. He along with David Miller, jointly became the fastest man to score a 35 ball 100. Just 2 months back, David Miller scored the fastest century in T20 against Bangladesh where he hammered 7 Boundaries and 9 Sixes. Rohit Sharma’s inning saw 12 Boundaries and 10 belligerent Sixes where he went onto score 118 Runs off 43 Balls.

T20 Matches – Records are meant to be broken

The India vs SL match in Indore on 22nd December 2017, witnessed many records broken. To start with, 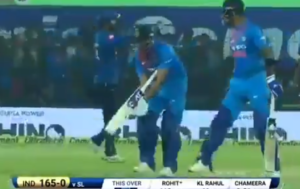 Rohit Sharma was looking devastating when he nudged the ball and was out at 118 Runs of just 43 Balls. Here, a very smart moment happened which was the signal that Rohit gave to Ravi Shastri to bring in MS Dhoni on the crease. In the second innings, we again saw, this smart captain introducing and motivating his young spinners who at the end gave him 8 wickets in total.

A truly remarkable and unforgettable innings and smart captaincy shown by Rohit Sharma. Do tell us your favorite moments from the match.