Kasigo Rabada, cricket player of South Africa cricket team is looking out for help from legal authorities because he was found guilty of having “inappropriate and deliberate” contact with Australia’s Steven Smith through match refree Jeff Crowe. Under these charges, he is suspended from playing the next two test matches.

Rabada fought against the level two charge which was pointed out to him after the first day’s play in Port Elizabeth. He took wickets in the Second Test series so as to help South Africa reach 1-1 in the four-match series. But this claim was rejected by Crowe saying that the contact was “accidental”.

Also Read: The Most Expensive Players in IPL 2018

Since Crowe rejected the claim, Rabada was fined with 50% of his match fee and was given three demerit points. The level once charge of sending off David Warner on the third day of the test was also accepted by Rabada. This added more points to his demerit list and consecutively he reached 9 demerit points. The eight demerit points marked that Rabada should be banned from playing the next two matches. 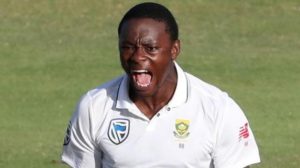 Soon after the decision was announced by ICC, CSA said that they would take legal counsel against the case which will be launched in 48 hours. If Rabada appeals, ICC would appoint a judicial commissioner within 48 hours to hear the case and resolve it. The hearing will be held within seven days of the appointment of the judicial commissioner.

If the hearing fails to take place before the third match of the test series which is to be held on March 22, ICC would have to allow Rabada to play the game till the time hearing takes place. Hence, it can be considered that Rabada still has a small chance to appear for the game, which is very essential and highly competitive.

Rabada opposed the level two charge of being in contact with Steven Smith, but it was rejected by Jeff Crowe. Crowe followed the letter of the law and proceeded through the legal process. He said, “He had the opportunity to avoid the contact, and I could not see any evidence to support the argument that the contact was accidental,” Crowe said. “It is also disappointing that this has happened the day after the pre-match meeting I had with both teams, where the importance of respect for opponents was highlighted. I take no pleasure in seeing a player suspended, particularly a young player of Kagiso’s talent, but he has now breached the ICC Code of Conduct on a number of occasions.”

Amidst all this, Mitchell Marsh, the Australian all-rounder was also charged with 20 percent of his match point and got one demerit point. The ICC did not take in his behaviour of swearing at Rabada on being dismissed during the fourth morning. Marsh was found guilty under article 2.1.4, which is related to use of any offensive and insulting language or gesture. The charge was accepted by Marsh so no further hearing was required.

This is the fifth time in the series when any player disobeyed the code of conduct. The previous ones were Nathan Lyon, Warner, Quinton de Knock and Rabada (twice). In the series three breaches have occurred following the pre-match meeting of Crowe with the respective teams.