Increase in number of shootings in America have led people to come out and protest against the legislation of the government for not being able to put a stop on gun violence.  Douglas, a student at Laurenzo Prado said, the ease with which Nikolas Cruz, the 17 year old, purchased a gun and killed 17 people in the Florida shooting, highlights the weak laws laid down by government. “The Laws of country have failed”, he mentions during his speech and there should be a stop to people buying assault weapons at a young age. 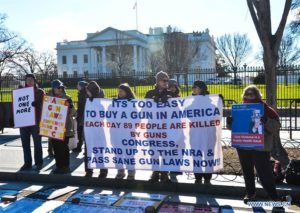 Trump responded to the Florida shooting as a matter of the ill mental health of the acquitted. The acquitted in Marjory Stoneman Douglas High School killed about 17 people in a gun shooting. Trump responded that the culture of gunpowder and high power or rapid fire military guns have no space in marketplace. This continuous gun violence in America is not just a matter of mental health, but something more than that.

It is believed that one death may be a tragedy, while millions of deaths is just statistic. Gun violence in America has become so common that death of thousand children around the country became statistic rather than tragedy. The elected leaders should be ashamed of this.

After the death of 17 students of Marjory Stoneman Douglas High School, the whole nation has come together to debate about how to stop mass shooting and violence. CBS News’ Bianna Golodryga, discussed with six people who were a victim to the gun violence. They shared their personal experiences and also talked about what should be done to prevent these gun shootings. They gave their views on how to stop these deadly shootings.

As a state, US government has failed to prevent gun violence. 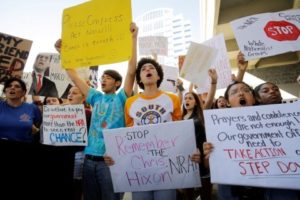 The survivors of the Florida incident came together to demand protection against these gun shootings.

“We are going to be marching together as students, begging for our lives,” student Cameron Kasky told ABC television’s This Week broadcast Sunday. “This has happened before and change hasn’t come. This is it.”

These survivors said that their call for march is a “badge of shame” for all the politicians who accept bribe, in the form of money from the National Rifle Association. She also rightly said that by doing this, they opt for bringing these politicians on the right side.

The “missing signals” from the part of FBI was also criticised by Trump. He said that the FBI missed on the intentions of the acquitted to opt for the mass shooting. After the incident, Trump tweeted on Saturday, “Very sad that the FBI missed all of the many signals sent out by the Florida school shooter. This is not acceptable. They are spending too much time trying to prove Russian collusion with the Trump campaign — there is no collusion. Get back to the basics and make us all proud!”

Several Hollywood actors came together to donate for the nation-wide protest. The first among them was actor George Clooney and his wife, Amal, a human rights lawyer. They decided to donate $500,000 to promote the nationwide protest against gun violence. Similar step was taken by other Hollywood celebrities too.

The couple were immensely inspired by the courage of the young students or survivors from Majory Stoneman Douglas High School in Parkland, Florida. Nikolas Cruz, 19, was a former student of the school, killed 17 people within the school with his weapons last week.

In a statement, the Clooney couple said, “Our family will be there on March 24 to stand side by side with this incredible generation of young people from all over the country. And in the name of our children, Ella and Alexander, we’re donating 500,000 dollars to help pay for this ground breaking event. Our children’s lives depend on it.”

The students who survived the incident, became the influential voices for the gun debate. They may even come up with new ideas that will help adopt the measures for gun control. These students have also appeared in their respective national channels which were shared online.

Clooney and Oprah amongst Biggest Contributors

After the Clooneys, a number of celebrities came in the forefront to donate for helping the March for Our Lives. Among these figures were producer Jeffrey Katzenberg and his wife, Marilyn, Oprah Winfrey and Steven Speilberg with his wife, Kate Capshaw.

Oprah Winfrey even took to Twitter to praise the steps taken by George and Amal. Her tweet read,

“These inspiring young people remind me of the Freedom Riders of the 60s who also said we’ve had ENOUGH and our voices will be heard.”

Sarah Chadwick, 16 was one of the students who organized the nation-wide protest against gun violence. She in a Telephone interview on Tuesday said that she and her team were really proud of the measures taken by George Clooney and his wife. The plans about the march were announced by these young group of survivors during the weekend.

As per her statement, “Five hundred thousand dollars. That’s not pocket change. That’s a lot of money, and we’re so thankful he donated it to our cause.”

Even Katzenberg in his statement said that they stand by the march and the protest of these young people. Just like the Clooneys, Katzenberg and his wife also donated $500,000 for the cause. His statement read, “We will join Amal and George Clooney on March 24 to stand alongside these remarkable young people. We are also donating $500,000 to March for Our Lives to support this historic event.”

Steven Speilberg and his wife also donated a sum of $500,000 and appreciated the efforts of the young people. He said, “The young students in Florida and now across the country are already demonstrating their leadership with a maturity that belies their ages.”

Six months before, the Clooneys had also made a donation of $1 million through their Clooney Foundation for Justice to the Southern Poverty Law Center, which tracks all the extremist groups.