The air quality in Delhi is depleting at a massive rate and it has not done anything to rise itself above the “severe-plus emergency” level. SC had banned firecrackers in Delhi, but the residents seem to have violated the order. What was the consequence? The citizens woke up to a defiled environment. The air quality of the area raised to 574, which is undoubtedly the worst for the year. It was about 10 times way above the safety limit. As per the System of Air Quality and Weather Forecasting and Research, any air quality above the 500 is under the ‘severe-plus emergency level’.

Several areas near Delhi saw severe violation in the air quality around Delhi. Some of the prominent regions where the defiance in air quality was observed included Lajpat Nagar, Mayur Vihar Extension, Dwarka, Noida Sector 78. Anand Vihar however recorded the severe rise about 999 in the morning after Diwali. The Major Dhyan Chand National Stadium too observed the severe rise and was in the verge of touching 999. The US embassy in Chanakyapuri recorded the level to be 459. All these areas were under the ‘hazardous category’.

In the Past: Anti-smog gun combats air pollution

The Supreme Court had given the order of bursting green firecrackers from 8pm to 10pm. The green crackers should have been allowed to emit less light, sound and less harmful chemicals. Despite the strict deadline been given, no one seemed to follow it. People went on to burst crackers till late which resulted in hazardous air quality the next morning. As per the reports of Central Pollution Control Board the air quality in Delhi began worsening since 7pm. However, at 7pm it was at 281 which immediately rose to 291 in an hour. The matter of concern arose when the air level went to 296 by 10pm. Thus, on Thursday morning, the Air Quality Index (PM) 2.5 was recorded to be 805. 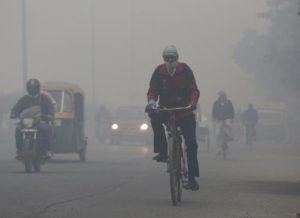 Delhi Smog: Concern for the authority

If any violation was followed in any area, the station house officer of that area was to be held responsible. Since so many violation had already taken place, police have promised to take strict action against it.

Areas such as Noida, Ghaziabad and Gurugram marked the bursting of firecrackers. But this significantly brought in the question of authority for the supreme court. Such drop in the air quality marks the concern for severe health issues in many individuals. If it keeps on decreasing, it can prove to be a problem for the people.

Although the Clean Air Campaign has been started from 1st November, one sees no hope in the improving quality of air.