Chinese space station is Tiangong-1 is expected to re-enter earth’s atmosphere and hit the surface within few weeks. The location where this 8.5 tonne station might possibly hit is yet not confirmed. It is expected that Tiangong-1 will enter the atmosphere within the first or the second week of April.

As reported by European Space agency, Aerospace Corporation (funded by US), it will come crashing down between 24 March and 19 April. Back in 2016, it was admitted by China that they had lost control over Tiangong-1 and failed to re-enter it for establishing the control. Aerospace believes that only a small part of the module will hit the Earth after its re-entry in the atmosphere. 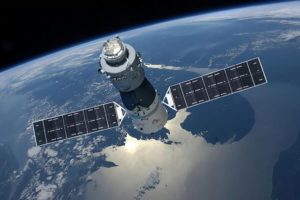 Regarding the module hitting the Earth, Aerospace said, “If this should happen, any surviving debris would fall within a region that is a few hundred kilometres in size.”

Aerospace also warned the people about the space station having hydrazine, a very toxic and corrosive fuel.

As per the reports of Aerospace, it is expected that the space station will re-enter the Earth’s atmosphere somewhere between 43 degree North and 43 degree South latitude. Hence, it may re-enter in the regions of Northern China, Central Italy, Middle East, Northern Spain, and Northern states of America, New Zealand and Tasmania. It is also possible that the space station will re-enter some part of South America and southern Africa. Though, it may re-enter the regions, the chances of it hitting any of these regions is very less.

Therefore, Aerospace stated, “When considering the worst-case location … the probability that a specific person (i.e., you) will be struck by Tiangong-1 debris is about one million times smaller than the odds of winning the Powerball jackpot. In the history of spaceflight no known person has ever been harmed by re-entering space debris. Only one person has ever been recorded as being hit by a piece of space debris and, fortunately, she was not injured.”

Trending: Moon to get its own 4G Network

Jonathan McDowell, an astrophysicist of Harvard University and space industry enthusiast also warned the people about the consequences of space station hitting the Earth. He said that earlier in 1st January, some small segments of a rocket had re-entered the atmosphere and landed in Peru. He said, “Every couple of years something like this happens, but Tiangong-1 is big and dense so we need to keep an eye on it.”

He said, “It is only in the final week or so that we are going to be able to start speaking about it with more confidence. I would guess that a few pieces will survive re-entry. But we will only know where they are going to land after the fact.”

Tiangong-1 is also known as Heavenly Palace Lab and was launched in 2011. It indicated that China would soon become a super-power in space. The space station was used for manned as well as unmanned mission and visited by the first female astronaut of China, Liu Yang in 2012.