Avengers: Infinity War Release Date, Trailer and What to Expect

The level of Expectations has been set high once again by none other than Marvel cinematic Universe. With the launch of Avengers Infinity war trailer they have set internet on fire. The fans are looking very excited to finally see “Thanos” the long promised villain on big screen. Many say that this is the answer to the Justice League by DC. It is said to be the biggest budget Marvels movie till date. 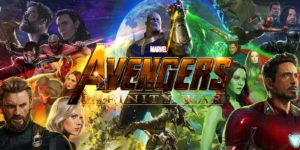 The first trailer for Avengers Infinity war arrived last year and it was as amazing as expected. In the trailer we can clearly see Thanos arriving in New York City with some of his disciples, we can also see many of our favourite superheroes getting beaten up by the bad guys. What the trailer did was it shows the entire Marvel Universe together against one big thread to Earth. It also opens up the thread that were left Behind in earlier movies like Spiderman’s Spidey sense and captain America’s shield etc.

There will be many new things which were very unexpected like captain America’s beard, the Winter Soldier with Black Panther. The Infinity war trailer brings back the broken team of Avengers and an extra set of Superheroes from outer space. We can see captain America’s side is with Iron men’s side but the most unexpected thing was watching black Panthers Homeland wakanda helping out other Superheroes.

In the last scene we saw Guardian of the Galaxy team with the Thor. Iron man has managed to bring some members to his team like Doctor Strange, wong, Bruce Banner (the hulk). In civil war we saw them falling apart and fighting with each other whereas it is vice versa in Infinity war. We also get a glimpse of Loki, he appears with tesseract and was trying climbing over the dead bodies of the Asgardians. It is more likely to say that he is giving tesseract to someone or maybe he is handing it over to Thanos we don’t know why he is doing so but soon we will come to know the reason behind it. We also get introduced to many other villains. 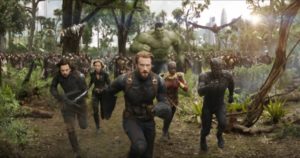 We can see a character throwing spare while Black Panther gives a voice over. If you look closely at the character who throws the spare is most likely to be a girl with bluish hair. In comic book she is known as proximo midnight. She is part of thanos’ team called “black order”. By the appearance of Proxima midnight we can say that Thanos will get Infinity stones by the help of his team members. We can also expect to see other members of black order like supergiant, ebony Maw. The trailer was highly edited to hide important information and to prevent giving any kind of spoilers. In the trailer we can see clearly Thanos is beating up our Superheroes. During Super Bowl Marvel released a 30 second teaser of Avengers Infinity war. This teaser featured all the superheroes from various Marvel movies that Marvel have been showing in big screens for past 10 years. Black Panther is there with whole Wakanda, original Avengers are there, even the guardian of the Galaxy crew, Benedict Cumberbatch (doctor strange), Ant man, Spider-man. This is going to be really confusing but cake to the eye at the same time.

There is no rating given till now to the trailer of The Avengers Infinity war but soon, we will get one. We will keep you posted once we have some updates.