It’s not even been a week that IPL has started and the fever for it just seems soaring higher and higher. The matches are exciting and heating up the environment. While in the first match, Chennai Super Kings (CSK) took up the winning, beating Mumbai Indians, and in the second, Delhi Daredevils were over powered by Kings XI Punjab, in the next match Kolkata Knight Riders in their home-ground defeated Royal Challengers Bangalore and won a million hearts. The fans are going gaga over VIVO IPL 2018. 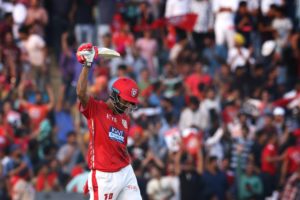 The mentor of Kings XI Punjab, our very favourite Virendra Sehwag had promised that he would provide entertainment accompanied by some aggression ever since the beginning of the match. And undoubtedly, the crowd of Mohali PCA Stadium witnessed both as KL Rahul overthrew Delhi Daredevils by 6 wickets in the second match of IPL Season on Sunday. To reach a target of 167, Rahul became the one to take away 50 runs in just 14 balls. He didn’t spare anyone in terms of run. First he scored 16 runs off Trent Boult, then 12 runs from Mohammed Shami. However, the best of his 50 was considered to be 24 runs, he took from Amit Mishra in the third innings. In Mishra’s bowling Rahul scored 3 boundaries and 4 sixes. However, he could not survive the full toss of Boult.

This was carried on by Karun Nair who scored 50 too but by 33 balls. The duo played in such a way that there was no need for Punjab to miss its lost Chris Gayle or Aaron Finch. The local player Yuvraj Singh failed to impress the Audience when he scored only mere 12 from 22 balls. Though he thrived to score but then Rahul Tewatia came and stopped his game. Kings XI Punjab, saw their winning strokes when David Miller was unbeaten at 23 balls with 24 runs and Marcus Stoinis scored 22 runs from 15 balls.

Ravichandran Ashwin, the IPL captain for the first time, seemed to play the magic trick when he chose his fourth overseas player, Mujeeb Ur Rahman the 17 year old spinner from Afghanistan. Mujeeb stood out immediately when he accounted in the third innings of Delhi for New Zealand’s Colin Munro. Munro attempted to make a hit in the full pitch drifter but he was knocked off in the wickets.

Though the performance of Delhi Daredevils was so disappointing, Gautam Gambhir who returned to the team after seven years made sure to try and knock out. He scored 55 from 42 balls by giving Axar Patel, 2 fours and one six.

Shreyas Iyer and Vijay Shankar also came to the rescue of Gambhir. From the Daredevils, it was Rishabh Pant who scored 28 runs from 13 balls, 4 fours and 1 six, in the 13th over of Delhi’s innings. He scored 17 runs in the 13th run from the Aussie bowler, Andrew Tye. Mujeeb outstood his performance. Though Pant tried to over throw Mujeeb, he couldn’t.

However, the highlight of the game was the fastest 50 of KL Rahul.