Raazi is the story based on the novel by “Calling Sehmat” by Harinder Sikka. The fictional novel was an attempt to bring into limelight the real story of an Indian woman who married a Pakistani man. The woman undertook the role of spying for India. This movie is not just a spy thriller, it has all the important elements that a Bollywood movie should have. This is therefore, the story of a daughter, a wife and a spy.

The story is about Sehmat, an Indian woman, who in 1971, at the zenith of Indo-Pak war married a Pakistani man. She did so in order to become a spy for India. This story perfectly fits the concept of Bollywood. Harinder Sikka’s book was published just exactly ten years before the date Meghna Gulzar’s Raazi is scheduled to release. Raazi is a fictional attempt on the life of Sehmat.

Undoubtedly, the lead of the movie, Raazi, Alia Bhatt has portrayed her character very beautifully. She plays the role of a quiet yet strong woman who becomes a brave spy. The trailer gives a brief understanding about the plot of the movie. Sehmat’s father played by Rajit Kapoor informs his daughter the importance of patriotism and protecting the country. He gives the hands of his daughter in marriage to Pakistani officer, Iqbal played by Vicky Kaushal. And the rest goes on about the attempts of Sehmat in sending the information gathered from Pakistan back to India.

The trailer gave us some view about how Alia was being trained. It also depicts and reflects the love between the newlywed couple.

The mission of Sehmat was to sink in INS Viraat into Pakistan. IN an interview with The Hindu back in 2008, the author had given us some idea about the story. He told, “Our Government could save its biggest pride on the sea only because of her.” He also went on to praise her and her father’s efforts and said, “I am yet to fathom how Sehmat’s father, a rich businessman in Kashmir then, could push his daughter to do such a dangerous thing. It was the ultimate test of patriotism for the family. Despite being an ex-soldier myself, I feel proud to admit that I learnt the real meaning of patriotism from her story.” 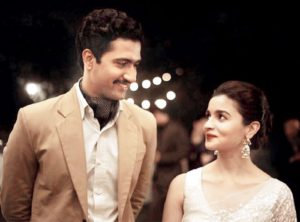 The songs of the movie have gathered much appreciation. The music produced by Shankar Ehsaan Loy has received much appreciation. The songs have been sung by Vibha Saraf, Harshdeep Kaur, Arijit Singh, Sunidhi Chauhan and Shankar Mahadevan. The lyrics penned by Gulzaar has weaved magic. Songs like the anthem like Ae Watan will bind up a feeling of patriotism in your heart, while the very soulful Dilbaro has a Kashmiri taste. The soundtrack was released by Zee Music Company in 18 April, 2017.

Directed by Meghna Gulzar and produced by Junglee Pictures and Dharma Productions, the film is all set to release on 11th May.