Well, seems like “achche din” are on their way. Just within a year of leaving China behind in major economic race in 2017, India is all set to accelerate even more this year. According to World Bank’s Global economic Prospects, India is likely to retain its position in the economic race even this year and will accelerate up to 7.3%.

This report showed that China’s economic growth has slowed down from 6.8% (2017) to 6.4% (2018). India’s growth estimate was also revised by World Bank. As per 2017 reports, the growth slowed down from 7% to 6.7% in the month of October due to minor issues like the newly introduced Goods and Services Tax (GST) and also a bit of private investment.

Every country has their own fiscal years. China’s fiscal year runs from January to December, whereas that of India runs from April to March.

As per the World Bank, the global economy is undergoing a broad based cyclical upturn. This cyclical upturn is expected to last for a few years and the risks for downside also exists.

The World Bank also cautioned, “In contrast, growth in potential output is flagging, languishing below its longer-term and pre-crisis average both globally and among emerging market and developing economies. The forces depressing potential output growth will continue unless countered by structural policies.” 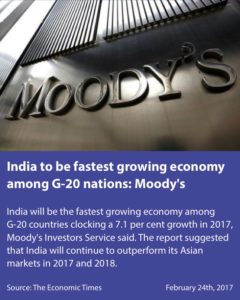 As per the reports of India’s statics office on Friday, the economy has slowed down from 7.1% to 6.5% this year. Last year it was 7.1%. This severe slowdown in the economic rate happened due to the effects of demonetization and GST.

Moody’s Investors Service released a report on Wednesday which stated that India and China will continue to be the fastest growing economic race even this year in the Asia-Pacific region. Economic affairs secretary Subhash Chandra Garg expects India to project a growth of 7.35 in 2018.

Also, the direct tax collections have grown by 18% in the first nine months of the fiscal year. This will help the government fill up the fiscal deficit that was caused to them because of GST and demonetization.

The World Bank has expressed their opinion about private consumption and service that will support the economy. They further added, “Private investment is expected to revive as the corporate sector adjusts to the GST; infrastructure spending increases, partly to improve public services and internet connectivity; and private sector balance sheet weaknesses are mitigated with the help of the efforts of the government and the Reserve Bank of India.”

The Bank also said that the major risks are related to the domestic nature for India. This will include issues like resolving corporate and financial sector balance sheet deterioration and debt write-off for farmers.

The report further added, “Weak private investment was only partly mitigated by a public infrastructure investment push and a surge in current expenditures after recent public pay hikes.”