US President Donald Trump had strongly criticized the Syrian President Bahar al-Assad and its allies Russia and Iran for making a ‘suspicion’ regarding the chemical attack. He called it saying that they will require a “big price to pay”. Medical sources have confirmed that dozens of people had died due to the attack in the town of Douma on Saturday. The crisis is however to be discussed by the UN Security Council on Monday. However, the charges of gas attack on the region has been denied by both Russia and Syria.

Due to the usage of such weapons for attacking, Pope Francis said “Nothing, nothing can justify the use of such devices of extermination against defenceless people and populations.” “an “immediate response by the international community” has also been called by the European Union.

Syria Gas Attack: What was the attack?

One of the video of the attacks showed many men and women and children lying on the floors of a house lifeless. Froth was coming out of their mouths. The video was recorded by the rescue workers called, white Helmets. Another video showed crying young children. Although the total number of dead people have yet not been determined. The Union of Medical Care and relief Organization, runs a medical facility in Ghouta told BBC News the confirmed number of dead people was 70. However, as per US based Syrian American Medical Society stated that 48 people died and showed the “symptoms indicative of exposure to a chemical agent.”

The emergency centres of Douma reported that about 500 people suffering from such symptoms were brought in the medical centres. One of the doctors of a hospital in the rebel-controlled town told BBC’s Joel Gunter, that he panicked when he saw his own children started coughing due to the gas when it started seeping into their hiding place. Another medical student also shared his experience about how he treated a dying man.

Syrian Gas Attack: The action of US military

More than 80 people had died in Sarin attack, in the opposition town of Khan Sheikoun, on April 2017. The Syrian government was held responsible by the UN and the Organization for the Prohibition of Chemical Weapons. As a response, the cruise missile attack was order on Syrian air base by President Trump. 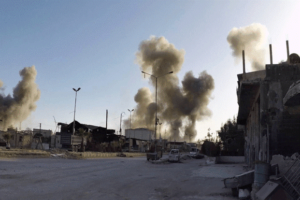 Regarding the question of America striking again about the attack of Saturday, Tom Bossert, the White House homeland security adviser told ABC television, “I Wouldn’t take anything off the table”.

The Syrians were also threatened that they would be attacked again by Emmanuel Macron, French President, if the Syrians attack the civilians once again. Prior to the tweet of Donald Trump, the US department stated that attack when confirmed will require an “immediate response by the international community.”

The Foreign Secretary for UK, Boris Johnson, on Sunday said that the gas attack needs to be investigated urgently. He said, “We are in close touch with our allies following these latest reports. Those responsible for the use of chemical weapons have lost all moral integrity and must be held to account.”

The charges have been denied Russian and Syrian government have been denied. The foreign ministry of Russia said that the attacks on Douma by the Syrian forces were ‘planted’ to make chances for the intervention of military in Syria. It added, “The purpose of these mendacious conjectures, which are without any basis, is to shield the terrorists and the irreconcilable radical opposition, which rejects a political settlement, while at the same time trying to justify possible external use of force.”

One thought on “Trump Condemns the Syrian Gas Attacks”