A Japanese woman named Nabi Tajima, who was regarded as the oldest person of the world died at the age of 117. She died in a hospital on Saturday evening. She died in a town in Southern Japan, Kikai as reported by the official Sususmu Yoshiyuki. She had been in hospital since January. 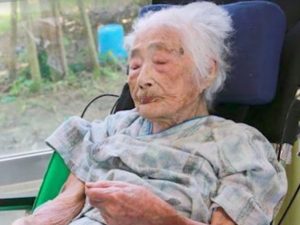 Tajima was born on 4 August, 1990. She was the last known person to have taken birth in 19th century. She has had 160 descendants and seven sons and two daughters. She had great-great-great grandchildren.

After the death of Jamaica’s Violet Brown at the age of 117, Tajima became the oldest woman alive. One of the video showed Tajima moving her hands to the beats of music. The music was being played on a Japanese traditional instrument. She was then celebrating her achievement of becoming the oldest person in the world.

Kikai is a small island with 7000 residents and located between Okinawa and Kyushu. It is the main southern part of the islands in Japan.

Yoshiyuki informed AFP, “Ms Tajima was living at a nursing centre for the elderly. In January, she became weaker, so she was taken to a local hospital.” She further added, “She died there (Saturday) due to her advanced age.”

The next oldest person

Gerontology Research group, based on United states stated that after the death of Tajima, yet another Japanese woman named Chiyo Miyako has become the oldest person in the world. She will turn 117 in the next 10 days. Miyako is a resident of Kanagawa prefecture. It is located in the south to Tokyo. Miyako is all set to turn 117 on 2nd May.

Guinness World Records had awarded the world’s oldest man to Masazo Nonaka aged 112 earlier this month. They were to award the same to Tajima but she passed away.

Tajima died three days after the death of Celino Villanueva Jaramillo. This resident from Chile claimed to be 121 years in age.

His ID cards also said that he was born on 25th July 1986. However, he had failed to provide any official documents about his age. Due to the lack of proper news and documentation, Guinness had refused to recognize the Chilean as the oldest person alive.

He claims that all his official documents were lost in a fire that burnt his house down some 20 years earlier.