Canadian Doctors from Quebec set forth an example as they refuse to accept the pay rise. The doctors came down to protest against their pay rise and said that they make too much of money from their profession and they don’t need any pay rise. About 700 people including, physicians, residents and students had submitted a signed petition, demanding a cancellation in their pay rise.

“We, Quebec doctors who believe in a strong public system, oppose the recent salary increases negotiated by our medical federations.”

The doctors said that it wouldn’t be appropriate to accept a rise in their pay when the people in their profession such as nurses and clerks have not got any pay rise while their working conditions are tougher than the doctors. They also refused to it because the patients, “live with the lack of access to required services because of drastic cuts in recent years.” 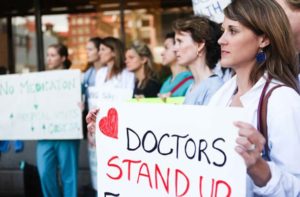 The issue regarding the shortage of the nurse was also forwarded by the nurses union in Quebec to the government. They demanded to specify the number of patients which would be looked after by one nurse, because of the shortage of nurse. According to the union, its members due to the problem had to work under difficult conditions and also over-work, while a number of nurses around the province had also protested to get allowed for better working conditions in the upcoming years.

The condition heightened when in January, a nurse named Emile Ricard from Quebec had posted a photo of herself in teary eyes due to over working. The post had gone viral in Facebook. She mentioned that in her floor she was the only nurse to look after 70 patients, which was a really tough job to deal with. Ricard also added about the cramps she faced due to overworking hours. She also mentioned that the cramps just wouldn’t let her sleep.

Regarding her conditions, she posted on Facebook, “This is the face of nursing,” and strongly criticised the Quebec Health Minister Gaetan Barrette. He criticised the fact that changes in the health care systems would lead to any improvement. She wrote in her post which was shared more than 55000 times, “I don’t know where you’re going to get your information, but it’s not in the reality of nursing. I am broken by my profession, I am ashamed of the poverty of the care that I provide as far as possible. My Health system is sick and dying.”

As per Global news, yet another nurse from the nurses’ union Nancy Bedard said, “There’s always money for the doctors, but what about the others who take care of the patients?”

The Demand of the Petition

Canadian Broadcasting Corp. News also said that in February, Quebec federation of medical specialists had entered into a deal with the government with the aim of increasing the annual salaries of 10000 medical specialists in the province by 1.4 percent which would be $4.7 billion to $5.4 billion by the year 2023. As per the reports of CBC, the salary for the specialists in Quebec is already too high ranging from $403-$537 on an annual basis while that of the same in Ontario is just $367 154.

The petition filed by the MQPR of doctors reported, “The only thing that seems to be immune to the [health-care system] cuts is our salaries. Contrary to the Prime Minister’s statements, we believe that there is a way to redistribute the resources of the Quebec health system to promote the health of the population and meet the needs of patients without pushing workers to the end.”

The doctors demanded in the petition that their pay rise should be cancelled and distributed equally among the health care system of Quebec. The result or the outcome of the petition still remains unclear to a number of people.

Statement of the concerned

The health minister, Barette said that the problems started surfacing after the issuing of the petition. He added, “If they feel they are overpaid, they can leave the money on the table. I guarantee you I can make good use of it.”

As per the news of Toronto star, Barette said that the government stated they should focus on the working condition of the nurses and would get the total attention. He told in an interview with the newspaper, “We have the money to address that.” Although, he further added, “That doesn’t mean we have infinite amounts of money, but we have the capacity to resolve that issue once and for all.”