On Tuesday, Samsung released PM1643 which is the world’s largest capacity solid state drive (SSD). It can store up to 30.72 terabyte (TB) of data. This SSD will be compatible with storage systems of the next generation technologies such as 64 layer V-NAND and 3-bit 512 gigabit chip. It is the inheritor of the 15.36 TB enterprise SSD which was announced back in march, 2016. Till date, this SSD by Samsung is the largest capacity Serial Attached SCSI SSD in the industry. 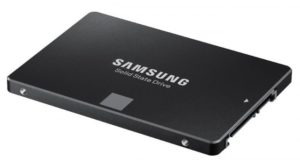 This new Serial Attached SCSI (SAS) drive has 128 GBps interface and can provide the random read and write speed of 400,000 IOPS (Input/ Output operations per second) and 50,000 IOPS. It will offer a sequential read and write speed of 2100 MBps and 1700 MBps respectively. This is almost three times faster than the previous generation SSDs and average SATA SSD. Its speed is more than that of Samsung’s own SSD 850 EVO. Samsung offers a five warranty for the robust drive, which means it can offer “one full drive write per day”.

Samsung has introduced a new control feature which enables it to incorporate nine controllers from the previous SSD into one single package. The drive contains Through Silicon Via (TSV) technology. Hence, the drive is capable of interconnecting 8 GB DDR4 chips and also creates 10 4 GB TSV DRAM package which totals to 40 GB of DRAM. This is for the first time, that any SSD has a TSV applied DRAM.

The software of SSD has the error correction code (ECC) algorithm. It is highly reliable and also offers low storage maintenance. It also supports the metadata protection feature along with data retention. In case of sudden power failures, this drive would help you to recover it easily. The drive offers mean time between failures (MTBF) functionality which can run for over two million hours.

In a press conference, Samsung discussed about their new SSD. Jaeso Han, Executive Vice President of Memory Sales and Marketing Team Department of Samsung Electronics said, “With our launch of the 30.72TB SSD, we are once again shattering the enterprise storage capacity barrier, and in the process, opening up new horizons for ultra-high capacity storage systems worldwide.” He further added that the company will “continue to move aggressively in meeting the shifting demand toward SSDs over 10TB.”

The date of the release of PM1643 is yet not confirmed. Although, Samsung has started manufacturing the models and will hopefully expand the market of enterprise of SSD later in this year. It will supposedly have 15.36 Tb, 7.68 TB, 1.92 Tb, 90 GB and 800 GB versions. All these aim at various marketing sectors like the government, financial services, healthcare, education and many more other sectors.