Tesla Model X P100D just set up a new Guinness World Record while performing the publicity stunt organised by Qantas. The challenge was to pull heaviest tow with an electric production passenger vehicle. Successfully, tesla was able to pull the Boeing 787-9 Dreamliner. The capacity of Tesla Model X is considered to 5000 lb. And with this much of capacity, it has already become the highest towing passenger electric vehicle within the market.

However, there are some owners trying to extend the capacity of the model. When at the beginning of the year, a truck got stuck on snow road in Raleigh, North Carolina, the Tesla Model X came to the rescue.  It pulled up the truck back on its track. Quite an impressive video of such a scene had been captured too.

The stunts by Tesla Model 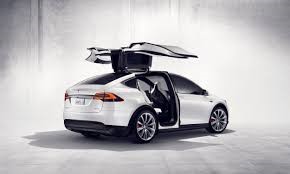 The owner of the Norwegian Model X, Bjorn Nyland has already performed a number of such towing stunts. He even performed a stunt from where he pulled out the 95000 lb semi-truck from the snow. This Model X was also used by Elon Musk’s Boring Company. He used it to pull out the 250000lbs of muck rail cars from the tunnels.

After all this, Qantas did not back out either. They too decided to test the capacity of Tesla Model X. They tested it on the basis of towing capacity. Qantas performed a publicity stunt where Model X pulled the Boeing 787-9 Dreamliner along the remote taxiway of Melbourne Airport.

This was all about the correct torque and traction. Tesla Model X just needed just got on the moving and eventually gained the speed. The wheel torque of Model X is 9500Nm. Though it is not much of a surprising factor but still it appears to be quite impressive for any electric vehicle.

Qantas decided to go on with the stunt to make a promotion about their collaboration with Tesla. It also marked the rewards for the Tesla owners. 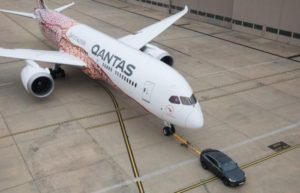 The rewards to the Tesla owners

Tesla owners who are the Frequent Flyers Members will get their mileage offset in the vehicles as well as in air for June in assistance with the Future Planet Program by Qantas.  They will also be rewarded with charging solutions by Tesla High Power Wall Connectors at the Qantas Valet facilities in Sydney, Melbourne, Brisbane and Adelaide. They would also enable the owners of Tesla Model S and Model X to change while they’re travelling. The facility of collaboration would also be given. They would be able to deliver innovation in respect of holistic sustainable transport.

Apart from the publicity stunt, this is for the first time ever that Tesla vehicles are being used at the airport. Earlier, the audience got a view of the launch of the full size glider of Tesla Model X into the air. The Tesla Model S was took up the form of a chase car for launching the spy planes on the base of Royal Air Force.