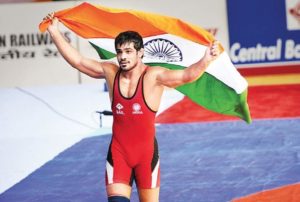 India’s pride, the two time Olympic medal winner and defending champion, has entered into the match of gold medal for the 74kg category wrestling for the Day 8 of the Commonwealth Games 2018. He also took to Twitter to announce that he has entered the phase. He entered the international phase with a bang. His last representation was at Glasgow Commonwealth Games in 2014.

His Tweet read, “I have reached the finals by beating Connor Evans of Australia by 4-0. All set to bring the gold for my Nation in #CWG2018 #JaiHind”. 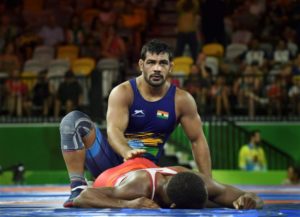 Sushil easily won over Canada’s Jevon Balfour and Pakistan’s Muhammad Asad Butt with all technical superiority. Not only this much, he also won over Connor Evans from Australia. In the finals, he has to compete Johannes Botha from South Africa for the 74kg wrestling.

The final match for the gold medal began at 12:30 pm IST on 12th April, 2018. Sushil emerged victorious in the final match by overpowering Johannes with all his technicalities. This marked the 14th gold medal for India at the Commonwealth Games.

Other contestants who made up to the final were Babita Phogat (53kg) against Diana Weicker from Canada, after winning over Samuel Bose from Nigeria, Deepika Dilhani from Sri Lanka and Carissa Holland from Australia.

For the bronze medal, Kiran will be competing for 76kg after losing to Nigeria’s Blessing Onyebuchi.

Rahul Aware also won over England’s George Ramm, Thomas Cicchini from Australia and Muhammad Bilal from Pakistani and entered into the finals for 57kg category.