FIFA World Cup is one of the craziest stuff that happens in the course of time of every four years. This is one of time of the year that people around the globe hold their emotions and sit down to observe the game, cheer the players. No matter what time of the day it is, people all over the corner sit down to watch this cheerful game of football. The FIFA 2018 has already started and created a lot of stir and excitement around the world. Fans around the globe are going crazy supporting their favorite players and teams.

Like every year, there is a clash between the twogreat Footballers, Messi and Ronaldo. However, it seems as if this World Cup is marking the beginning of something else. The game has already started. While so many games secured a draw against each other, this one game between Mexico and Germany has got hold of everybody’s attention. Mexico successfully achieved victory over Germany. This does not come to a stop over here. What is more exciting about this is the fact that the people of Mexico celebrated the win in such a way that it almost caused a mini earthquake.

We are not even kidding, it is true, last Sunday in the morning, the seismic sensors of Mexico recorded that there was a small earthquake across the country. However, the group examining the gauges further reported that an artificial cause triggered the earthquake.

The group at Institute of Geologic and Atmospheric Investigations said: “Possibly because of mass jumping”. The group further added that about two sensors had recorded the activity.

It is quite clear that the mass jumping was because Mexico won over the powerhouse Germany in the FIFA World Cup 2018 happening in Moscow. The Mexican team held up to secure a win over Germany with 1-0. Germany is known to be the defending World Cup champions. 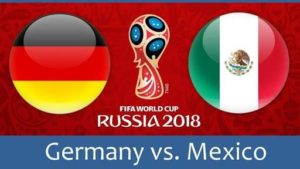 To know about the excitement and happiness level of the Mexicans over winning the game, one needs to look at the recordings of the seismic graph. This will give you an idea of how much excited these Mexicans were. Also, not only the figure there are several other examples of the excitement of Mexicans.

As the referee blew out the final whistle, the country jumped out of happiness. All the people came down on the streets to celebrate, and even strangers did not refrain from hugging each other.

The Continuation of the celebration

Even after several hours of the match, the Mexico City was busy celebrating. All around the city were car horns blowing, happy fans making heads turn, public places celebrating with the Mexican flag. It was as if a huge party going on within the country with people shouting, singing, drinking and doing everything they could to mark the celebration of Mexico’s win.

It wasn’t because of sports itself that the people were so excited. The win came as a surprise to many people that in its first World Cup match, they managed to secure a win over Germany. Therefore, the country got a reason to celebrate after the happy news. This happy news gave some break to the rising tension due to political campaign season. It is all set to begin from 1st July at more than 3400 posts of the local, federal and state level inclusive of the presidency.

Happiness among people and Prez

One of the persons involved in the celebration, Juan Rodrigo Guadarrama, the taxi driver of age 32 said, “It’s so surprising. I barely felt like watching the match, because I thought we were going to get badly beaten. I thought we would not have a chance. However, the fact that we won renews our hope.” He went on expressing his happiness and said, “We are so polarized and against each other these days, with the elections and everything else going on, that this brings us back together and makes us feel like things are possible.”

Though Mexico was a host for the World Cup twice and even won for the third in a current bid with USA and Canada, the team wasn’t able to qualify beyond quarterfinals.

As soon as the match ended, President Enrique Pena took to congratulate the team and announce their victory. He wrote, “Confirmed: Mexico competes and wins against the best in the world. Many congratulations to @miseleccionmx! Great game!”

It is for the first time in the course of history that the world has observed such happiness among the citizens because of winning the game. Undoubtedly, the game of Football is interesting. The FIFA World Cup this year seems to be quite interesting.