Nearly 150 short finned pilot whales were found on Thursday on the southwestern coats of Australia after being stranded. The matter came as a shock to the concerned officials and all of them got into the mission to rescue the whales and save as many of them as the officials could.

The time of when so many whales landing stranded on the coasts is expected to be around either late Wednesday night or early Thursday morning based on the local timings. The state’s parks and wildlife services reported the timing while adding that the animals had landed from Hamelin Bay of Western Australia.

The video of the short finned pilot whale had gone viral. The viral video showed nearly hundreds of whales on top of each other while the viewers expressed their concern. Some expressed that they were alive, when they moved their tails. Few whales were completely on dry land struggling, whereas some were in the shallow waters expressing a tinge of relief. 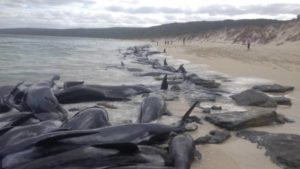 Exact timings of when the whales were found remains unknown but 75 of the whales were dead by 9:30 am as per local time. Soon after the discovery of the whales, the beach was shut down by the officials. All the required equipment and trained people were brought in to help the alive ones return back to the deeper water.

The incident controller of the park and wildlife services, Jeremy Chick said, “The strength of the animals and the windy and possibly wet weather conditions will affect when and where we attempt to move them out to sea.” He further added, “The main objectives are to ensure the safety of staff and volunteers as well as the whales’ greatest chance of survival.”

The officials had put in a lot of effort to save the whales, but by noon, most of them were dead leaving only 15 alive and by 4pm only 7 were living. The officials were having trouble in rescuing the whales due to rocky beach, harsh condition of the seas and presence of so many whales at one area on the same time.

Regarding this Chick added, “The conditions are challenging, but we are doing all we can to give these animals the best chance of survival without risking the safety of staff and volunteers.”

He further said, “Once we have moved the whales out we will monitor the situation closely as it is possible the whales will come back into shore and re-strand,” he said. “This has often been the case in previous mass strandings.”

Finally by 7pm, 6 surviving pilot whales were sent back to the deeper water as announced by the parks and wildlife service. The photo tweeted by them showed the black line of whales appearing as a line of division between the crystal clear sea and the pristine beach.

These kind of beachings of many sea animals at a time, happen quite often ever since history and different theories are given regarding it. Evidences from past via paintings and documents are available, whales and dolphins being the most common. These animals travel in groups. Scientists have given the theory that these group follow a leader who in effort to catch a prey, reaches close to the beach and end by stranding themselves.

However, the environmental groups give the theory that these animals get uncomfortable due to the underwater sounds triggered by the use of sonar by the military personals. Hence, they end up coming too close to the beach and stranding themselves.

The Western Australia parks have faced these kind of beachings back in 1984 and 1991. One of the parks service added,

“They inhabit tropical and subtropical waters and may be seen in the hundreds but groups usually number less than 100. Short-finned pilot whales are closely related to long-finned pilot whales, although they have shorter flippers with less of an elbow. They have a bulbous forehead, but the flippers are less than 18 percent of the body length.”

The largest of all the mass beachings in Western Australia happens to be that of 1996 when 320 sea animals had stranded themselves in Dunsborough, 55 miles to the north of Hamelin Bay. In the previous year, more than 400 long finned pilot whales were found stranded in New Zealand. Only 100 of them were saved.

The co-ordinator with state’s parks and wildlife service said to Sydney Morning Herald on Thursday, “It’s one of the mysteries of nature. Once they come ashore like that they do deteriorate quite quickly.”