Ever wondered to have a movie that is full of the glamour and a strong cast? Well, here it is. The “Magnum Opus” of Karan Johar, Takht.  After a long time, Karan is returning to the field of direction and Takht is full of strong powerful characters and a blockbuster star cast. The movie is expected to be a massive project for KJo. The title of the movie signifies, the fight for throne. Takht in English translates to Throne. 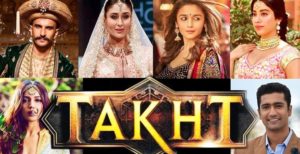 The cast of the movie is very strong and really impressive. With all the strong actors and actresses lined up in one frame, it can definitely be said that Karan Johar is sure to deliver a massive hit this time. Kareena Kapoor Khan, Ranveer Singh, Vicky Kaushal and Karan’s favourite Alia will be seen as the lead actors in the movie. Apart from them, Bhumi Pednekar and Anil Kapoor will also be seen in the movie. Sri Devi and Boney Kapoor’s elder daughter Jhanvi Kapoor who recently delivered her debut hit of the Marathi remake, Dhadak, opposite to Ishan Khattar will also be a part of the movie.

Takht is solely based upon the Mughal dynasty and the fight between the two brothers for the throne. As per the tweet of Johar, Takht is the story of “war for love”. Takht in English means Throne and two brothers will be on their battle for the throne. We are well aware of the history of Shah Jahan’s sons, Dara Shukoh and Aurangzeb. Thus, the film is about the tussle between the two for the throne. Vicky Kaushal will be playing the role of Aurangzeb while Ranveer will be portraying the role of Dara Shukoh. Kareena will be seen essaying the role of Ranveer’s wife Jahanara Begum. Nevertheless, Alia has a crucial role to play too. She will be seen playing the role of Dara Shukoh’s love interest. Apart from these, the role of other characters haven’t been disclosed yet but people are pretty excited from the first look itself. It will be a treat to watch Anil Kapoor return with such a massive hit. 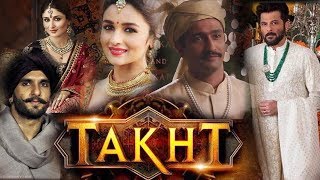 The look of the characters haven’t been revealed yet, but the names of the cast had been revealed. The background of the poster looks stunning reminding us of the huge Netflix hit, Sacred Games. The look was revealed yesterday, that is on 9th August. All the enlisted cast had shared about it. Ranveer who is currently working for Dharma Production’s Simbaa shared and stated that he is proud to be a part of a massive multi-starrer like that of Takht. Alia also shared the poster and talking of nostalgia stated that she is back from where she started.

Takht is a multi-starrer Magnum Opus, Bollywood had been waiting for. The movie will begin next year, 2019 and will be released by 2020. Before that Karan has got a list of movies under his Dharma Productions banner such as Kedarnath, Simbaa, Brahmastra, Student of the Year 2, and Ranbhoomi. The whole of Bollywood had shared their excitement and good wishes for Karan for his historical movie.