Seems like somebody’s finally on the track to give a tough competition to our Singham. Guess what, it is none other than our Padmaavat star, Ranveer Singh. Rohit Shetty is back with his action-drama sequence and people are sure to love it. Karan Johar’s Dharma Production is launching the movie and it is to go on the floors soon. For all the fans excitedly waiting for the movie, the trailer is soon to make its way on the screens. Simmbaa is the remake of huge Tamil hit, Temper. And our Bajirao Singham will too be featured on the film.

The cast of the movie is pretty interesting. Our Padmaavat star, Ranveer Singh will be seen playing the role of a cop, Sangram Bhalerao. His role is expected to be very much similar to that of Ajay Devgan’s Bajirao Singham. Nevertheless, Ranveer’s Sangram Bhalerao would be fun yet entertaining. Opposite to Ranveer Sara Ali Khan, daughter of Saif Ali Khan and Amrita Singh as Priya Bakshi is being casted.

It is her debut movie. Sonu Sood maybe making his comeback as a villain in this movie. Everyone had appreciated Sonu for his villainous role in Entertainment and Salman Khan starrer Dabanng 2. Sonu will be portraying the role of Vikram Khanna.

Apart from them, the movie will also see Suresh Oberoi as Mr Bakshi and Zakir Hussain as Mr Khanna. Everyone’s favourite, Bajirao Singham will also be making a special appearance in the movie. The film is expected to have a number of turns and twists which is why it is a must watch. 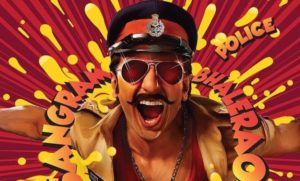 90s will be recreated in the movie and will feature the song, Aankh Maare Oh Ladka Aankh Maare. Tanishk Bagchi will be recreating the song. Apart from him, the movie will also have music from DJ Chetas, S Thamman, Arjunna Harjaie and Jayanta Pathak.

The title song of the movie Simmba Aala Re will be composed by S Thamman.

The movie’s first look was released by Rohit Shetty on 6th June and Ranveer had shared on his Instagram account. The photo featured Ranveer Singh, Rohit Shetty, Sara Ali Khan and Karan Johar. On the same day, a short video was released too giving us a hint of the fun in the movie.

Jhanvi, not Sara the first choice?

Rohit Shetty will be directing the movie under the banner of Karan Johar’s Dharma Productions. The film will be the debut of Saif Ali Khan and Amrita Singh’s daughter Sara Ali Khan. After the debut of Jhanvi Kapoor, people had been excitedly waiting for Sara’s debut and seems like it’s finally here.

However, as per sources, Sara wasn’t the first choice by the makers to be casted opposite Ranveer. It was Jhanvi Kapoor. Jhanvi couldn’t hold back her excitement and revealed it too soon. But she lost the role to Sara. As per reports, Jhanvi was too excited and revealed the details of her being a choice for Simmba. She also expressed her nervousness to be casted against Ranveer Singh. Nonetheless, this didn’t go well with the makers and Sara was finalized for the movie.

The film will be hitting the theatres near you on December 28, 2018. After this, Ranveer will be seen in Karan Johar’s Takht while Sara will be seen against Sushant Singh Rajput in Abhishek Varman’s Kedarnath.