Shimla Runs Out of Water – Worst ever Crisis

Shimla has been subjected to water crisis at the zenith of the tourist season. This is the eighth day in a row when the region is tormented to dry taps. The tourists and the local residents were forced to buy water at higher prices and bookings at the smaller had to be cancelled. The fall of water by 50% in the Queens of Hills just depicts it that the dry winter is approaching.

People even came down to protest about the water crisis on the night of Sunday at the office of the water workers at the Main Hall Road. Even the police had to intervene into the matter to stop the mob from approaching the residence of the chief minister, Jai Ram Thakur. The chief minister set up a committee on Monday along with Chief Secretary, Vineet Choudhary, to look after the water crisis in the region.

The Himachal High Court also took to determine the water crisis, and also asked the water officials to look into the matter to describe the reason behind water crisis. The court also investigated municipal commissioner, Rohit Jamwal and other municipal officers to explain the cause for the water crisis in the region. 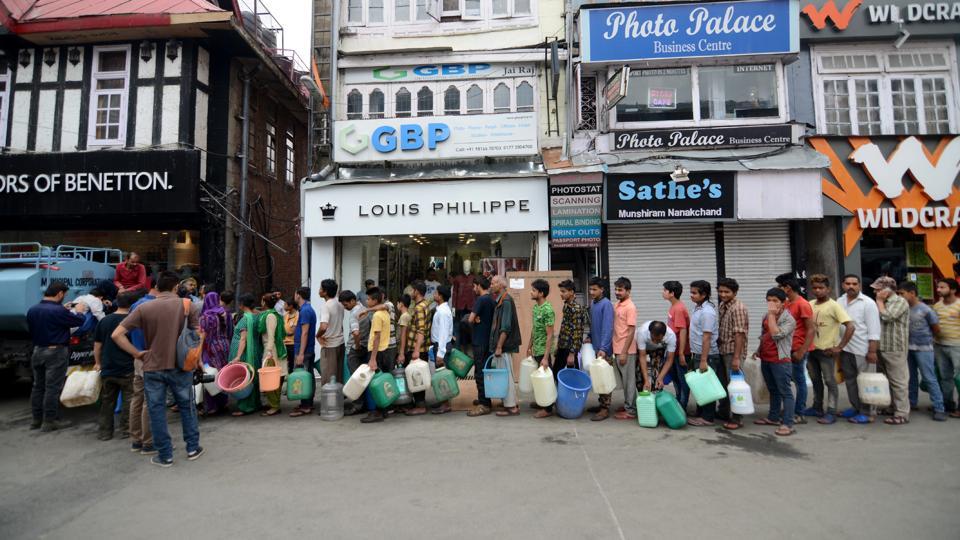 Statements of the officials

Even the President of Himachal Bar Association, Brij Mohan Chauhan came in forefront to add, “We haven’t seen such a situation in the last 20 years. The government has failed to provide even drinking water to people.” Jamwal reported the situation to be odd and also said that the crisis was growing since a log time. He also added that in the previous three summers, water availability had moved to 29 to 30 million litres per day (MLD). The demand for water in Shimla during the tourist season is reported to be around 45 MLD. Jamwal added, “This year we are able to supply only about 20 MLD. That makes it tough to match demand.”

The crisis for water had forced the local residents to stand in the lines for several hours to get a bucket of water, buy water from private suppliers at a rate double than that of normal. Some also had to leave the place to comfort of their villages. The councilor of Congress, Sushma Kuthalia added, “There is no water in the area for the last one week. The residents were told that supply would be restored on Sunday but nothing happened. The people are agitated about the (government) inaction. Most of the traders kept waiting for water the entire say.”

Kasumpati has not faced water supply since the past 13 days. The previous councilor, Narender Thakur also added, “Some areas are inaccessible as even tankers cannot supply water there.”

The shortage or crisis of water was recorded at the hotels too. Out of all, the hotels suffered most loss because of the water. One travel agent of Mall Road, Suresh Dogra talking about his experience also added, “Many bookings have been cancelled in the last two to three days. When the government cannot provide water then it should stop promoting Shimla as tourist destination.”

Many hotels have also turned into for taking the support of private tankers to meet their water supply for their guests. However, even in such a condition they couldn’t meet their daily need. One of the residents from Noida, who visited Shimla, Raman Singh added, “I cancelled my booking in Shimla after a local hotelier told me that he could not assure adequate water.”