After the build-up, the memo is out. It is a four page document by the House Intelligence Chairman Devin Nunes and his committee staff. It has means for Russian investigation, key figures of Justice Department and President. FBI is being alleged by the Republican memo.

The Republican memo also abuses the Justice Department for its Foreign Intelligence Surveillance Act. It made severe serious allegations against FBI for using the information improperly for Hillary Clinton’s campaign so as to obtain the FISA warrant for the campaign of Trump.

However, Democrats are strictly against the memo and called it a “misleading document”. They said that the memo doesn’t bring forth any facts about the Page FISA application. The Republicans were accused for using the memo to undermine the probe of special counsel Robert Mueller.

Despite, so many controversies, the memo was passed by the White House with strong objections by FBI and Justice Department. Not only this, the FBI also released a public statement where it expressed “grave concern” about the omissions of the memo. Through this statement it put Trumps in the odds with his FBI Chief.

Top takeaways of the most controversial nunes memo:

The main central allegations within the Nunes memo is present almost at the end of the four page document. These include, “(FBI) Deputy Director (Andrew) McCabe testified before the committee in December 2017 that no surveillance warrant would have been sought from the FISC (FISA court) without the Steele dossier information.”

Most part of the memo contains the facts about the opposition dossier of Trump and Russia. This was written by ex-British Intelligence agent Christopher Steele. The memo also focuses on how Steele through “indirect payments from Democrats and anti-Trump views” weren’t discussed at the FISA court.

But the allegations made on Steele aren’t that serious. It is considered to be significant because his dossier was larger than the FISA application by FBI. The Republicans mentioned that it was essential referring to the McCabe’s testimony but this was disputed by the Democrats.

“If you look at the whole of Mr. McCabe’s testimony, what he was describing is that the FISA application relies on all the components within the application, each and every component,” was said Rep. Adam Schiff, the top Democrat on the House Intelligence Committee. He also went further to say, “And only in that sense is it fair to say, well, if you take out any piece of it then does that mean that the application would not be complete?”

The release of transcript is the only way to know who actually holds truth with McCabe’s Testimony.

The published Nunes memo focuses on the role of dossier in the Page FISA warrant. But it also contradicts its own arguments and states the FISA application containing news of Trump’s campaign of foreign policy adviser George Papadopoulos. It said that the dossier wasn’t the only one responsible. There must have been some intelligence responsible for it. 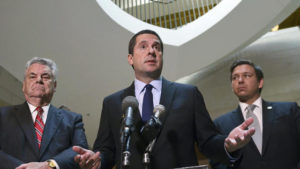 The memo sparked off the issue of Papadopolous starting off the Trump-Russian investigation. Papadopolous with the help of a Russain professor who was in contact with the Russian government and claimed to dirt Clinton’s reputation. This was disclosed to FBI by Australian Government.

No strong evidences of it were made but it stated that a large part of it was responsible because of the investigation that was triggered by Papadopolous back in 2016. This was done a long time before the filing of Page FISA’s application.

The minor yet important role of Rosenstein

Even before the release of memo, it was suggested that senior DBI and Justice Department officials would be implicated inclusive of the Deputy Attorney General Rod Rosenstein.

Rosenstein can guide every one of the Russian investigation because he can only dismiss Mueller. Trump had said in a statement earlier this week that he wanted the release of memo as he believed it would discredit the possible collisions of his campaigning associates and Russia.

In the memo, Rosenstein is mentioned only once, which shows he has a role to play in the warrants of Page FISA. There were three renewals of the warrant which states that he was giving information to the Russian government acting as an agent.

Trump has not given any statement about dismissing Rosenstein but he has also not casted his vote of confidence in Rosenstein’s favour.

Importance of credibility and undermining it

Credibility yet comes as one of the major factors. The main of the dossier was to decrease the credibility of Steele and everyone around him.

According to the memo, Steele had to lose his credibility for the Anti-Trump views. Due to being paid by Democrats, he was also accused of telling the officials of Justice Department that he was, “desperate that Donald Trump not get elected and was passionate about him not being president.”

Steele was criticised for being associated to Yahoo news and lying and hiding this fact from FBI. This ruined his past status as the most faithful and reliable employ for the investigation of 2010.  Stephan Viadeck, legal analyst of CNN and professor of Texas School of Law also gave his views about the involvement of Steele and also points towards the Nunes memo leaving out certain important information on which the government relied to get the warrant

Russian investigation’s the House Intelligence Committee was rolled out for almost a year when the Nunes opted out of the probe. Later, Ethic Investigation Committee was also cleared. Both the committees have been working with one another under the Texas Republican Rep. Mike Conaway.

Even before the release of memo, the lawmakers were sure that they would come up with the two contradicting sides of the reports. One, which is from the evidence less Republican side while another from the complaining Democrats sides.

Both the sides have been against each other for the past two weeks about the Nunes memo. Although the role of Nunes in Russia investigation still remains at the back.