One of the most auspicious festivals in the Indian culture is Navaratri. This festival is widely celebrated in Gujarati and Bengali community. Navaratri in Hindi means nine days and nights. During the course of nine days, the nine different forms of Goddess Shakti are worshipped. The festival is a sign of victory of good over evil. You can get the chance to cherish Garba Raas and Dandiya during this period of time. Although, there are four types of Navaratri celebrated around the year, the most common one is Sharada Navaratri which is celebrated during the Hindu month of Ashvin and is celebrated in Honor of Devi. The Navaratri festival usually occurs during the month of September to October.

The Nine Days of Navaratri

The myth of Navaratri holds a lot of significance for the farmers. Due to this, the farmers choose to bestow their gratitude towards the Maa Durga and asks for her blessings. The first three days of Navaratri are dedicated to the three different forms of Maa Durga, Kumari, Parvati and Kali. The devotees from various places come together to enjoy the piousness and grant their offerings to the Goddess. People celebrate the festival by wearing colourful dresses.

Navaratri ends with the coming in of Dussehra which requires fasting, and relishing on the various delicacies. On the last day, the Kanya Puja is done in which nine females are worshipped considering them to be the form of Maa Durga. As per the ritual, the feet of the girls are washed and they are gifted new clothes.

The historical or mythological significance of this was Lord Shiva gave permission to Goddess Durga to see her mother only for nine days. However, in these nine days, Goddess Durga defeated the demon, Mahishasura. Thus, Goddess Durga is a presentation of Shakti. Maa Durga’s eternal divine power is celebrated which can never be created nor be destroyed. 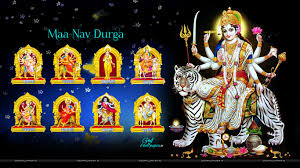 The festival of Navaratri is a grand pompous festival with too much of lights and happiness all around. While in Gujarat, Navaratri is celebrated by fasting and playing Garba it is a little different in Bengal.

People go on celebrating in Bengal by visiting the different Puja Pandals and worshipping the idols of Ma Durga.

Some of the prominent quotes related to Navaratri include

This year, Navaratri will begin on 10th October and continue till the 18th October.

Enola Holmes 3: Potential Release Date, Plot, and Cast Everything You Need to Know