The nation is in shock after its favorite, Salman Khan was sentenced to jail for 5 years for hunting the protected species of black buck. This just came off as twist in his movies, which took off a dramatic turn causing problems for him. Salman Khan was found guilty by a Jodhpur court in Rajasthan on Thursday. He was accused of shooting down two black bucks from his car window years ago in 1998 when he was in Jodhpur shooting for one of his movies.

The prosecutors said that he was present with his co-stars in the car and they ran away the spot when they were spotted and left the carcasses of the animal behind. The others accused were Tabu, Saif Ali Khan and Sonali Bendre but charges against them were cleared off due to lack of evidence. India’s wildlife Protection Act, states that no wildlife animal must be hunted without any special permit. Apart from the jail sentence, he was also fined for Rs 10000. 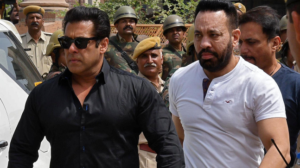 The statement of lawyer

His lawyers are against the decision and the urgent bail was filed or him for Friday on 10:30am. He went to a nearby hospital for medical examination and then later on he was taken into the central Jail of Jodhpur. The court was circled by fans, and police had to be called to keep these fans in control, who love him for his roles in the film as well as the bad boy image.

Over the years, the actor have said that the forest officials were doing it for publicity while the blackbucks may have died from any natural cause like overeating. The lawyer of the actor, Anand Desai also expressed his shock as he stated that the judgement was given upon the same case for which his client was convicted by the Rajasthan High Court, in 2007. He also questioned the authority for letting free the other accused while he also said, “that Salman was out hunting alone in the middle of the night in a remote area outside Jodhpur”.

The charges on Salman Khan

A number of cases were filed against Salman over the years. He has the history of clearing off the cases against him. Back in 2015, he had brushed the case of hit and run drive in which he had killed a homeless man. The decision was challenged in the Supreme Court.

His former girlfriend, Aishwarya Rai had also levied the charge of torturing and physical abusing her. He was also arrested back in October 1998 for poaching the blackbucks. Against eight years later he was held guilty and sentenced to jail for five year term for hunting and killing the blackbucks.

The charges of poaching was made by a member from the Bishnoi community, a community which considers the blackbuck to be a reincarnation of their 15th century Guru. Poonamchand Bishnoi claimed that he heard gunshots and then saw the actor leaving the scene in his car. The Indian dilm industry and journalist, Anna MM Vetticad regarding the case wrote, “Khan’s bad-boy image has sustained him from the beginning of his career. The frequent reports of drunken misbehaviour in public, indiscipline at work and girlfriend abuse, along with the hit-and-run and poaching cases that finally landed him in court, have contributed greatly to fan enthusiasm for him.” Regarding her fans, she added, “To them, [he] is a golden-hearted man-child whose charitable trust is reason enough to forgive him for what they consider mere human failings.”

If Salman does not get the bail and is sentenced to prison, a number of his projects would suffer a severe loss. Till now, rs 500 crore is at stake.