Kolkata Bridge Collapse: Yet another Bridge in Kolkata goes down, 3 in six years

It is really astonishing to note that within six years, third bridge has gone down in Kolkata. The third bridge that collapsed in Kolkata on Tuesday afternoon was the 20 metre long Majerhat bridge. About twenty-one people were severely injured in the bridge collapse while while two have reported to be dead. About two hospitals were contacted to help and rescue officials also came out to determine several were admitted in the hospital.

Kolkata Bridge Collapse: The injured and the dead

Among the dead was Soumen Bag. He was along with his friend returning from College Street after buying books. Who knew such a faith would fall upon Soumen while his friend is still struggling at the hospital. As per the witnesses, just when Budge Budge-Sealdah train passed, the bridge started breaking and ultimately collapsed. Soumen was on his bike when he fell straight as the bridge broke onto two. Along with Soumen’s bike, one minibus, two bikes and five cars also fell straight into the split.

The bridge is a major connection between Kidderpore (Kolkata) and one of the posh areas of South 24 Parganas, Behala. The bridge collapsed at the peak of its hours when a number of vehicles move through it. Several of employees return from their offices during that time using that bridge. As per the estimates, the population of Behala is about 10 lakh. 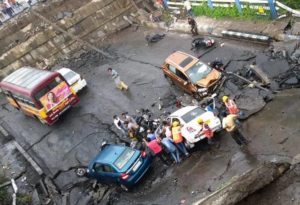 The eye-witnesses of the event gave some spine-chilling stories about how the bridge towards its Northern section started collapsing. One of the witnesses, Rahul Rai moving towards Behala Chowrasta via a cab said,  “A minibus and cars that were ahead simply disappeared.” He further added, “The rest of the bridge shook as my cab screeched to a halt and I stepped out. We were met with surreal sight of cars and buses perched on the road that had crashed down two-and-a-half storeys.”

Another person who was moving from Taratala to Mominpur said he felt the ground below him moving. Describing  the horror and tremor of the incident Sumanji Jha added, be “There was darkness and a lot of dust. Trapped cars, bikes and a  minibus came into view as the dust settles down gradually.”

The residents of Mahadev Tala slum of Burdwan slum noticed the horrifying incident and took to inform the officials. They also took to help the people by removing  commuters from bus and the injured bikers. But, the terror does not end, one of the individuals Darshan Kheti might still be trapped under the ruins of the collapsed bridge as per his friend.

CM Mamata Banerjee who was in Darjeeling when the incident occured sent out an emergency team  under guidance of Chief Secretary Malay De. Talking of the incident she said, “We are worried. Our  priorities are relief and rescue.” She has also asked De to get a report from Arnab Roy, the PWD secretary. She also announced a compensation of Rs 5 lakh for the dead and Rs 50000 for all the injured people. 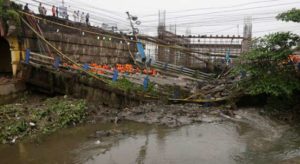 Governor Keshari Nath Tripathi also visited the spot and was within gubernatorial limits. Nonetheless, he has asked all the agencies “responsible for maintaining bridges to do a thorough examination or all bridges and take corrective measures”. The collapsed part of the bridge was under the jurisdiction of public works department. The part of bridge which stands tall over the railway lines belongs to the railway department. Mr Tripathi further added, “The bridge deserved better maintenance. There was a report on a pit here for quite some time. I don’t whether the PWD noted it. The matter requires investigation.”

All the rescuing teams, like that of Kolkata Police and fire brigade reached the spot within 30 minutes. Immediately they started carrying the patients to hospital. The team if National Disaster Relief Force, of VIP road also reached the spot and lend a helping hand. Nonetheless, the officials were prevented from their job due to the heavy rains and dusk.

The traffic of Diamond Harbour Road were also stopped due to the bridge collapse. Rajeev Kumar, Police Commissioner and traffic polices came together to support the people and lend a helping hand for maintaining the traffic. Kolkata Bridge Collapse: What is the problem of bridges in India?

In short if the question is to be answered, it would simply be ignorance of the concerned officials. Considering the history of bridges, this is the second bridge collapse this year.

The first bridge collapse this year happened in Varanasi which killed 18 people. That is not it, in the previous two years, this is the fifth bridge collapse.

In 2016, the under-construction bridge of Vivekananda Road, Kolkata collapsed and claimed 27 lives. Even today, people are under the tremor of the bridge collapsed. But, even after that the ancient or rather the British-era bridge along Mumbai-Goa highway collapsed too. About 22 people died in the collapse.

Kolkata Bridge Collapse: What is the condition of the bridges?

For the Majerhat bridge, a warning was sent out back in 2015 itself. But it was not taken into consideration. But that is not the end of story. Several bridges are still structurally unsafe in India but no one is taking a note of it. In 2017, a survey of 1.62 lakh bridges was undertaken. The results showed that about 23 bridges over the national highway were hundred years old. But 147 bridges needed to immediately looked after to avoid the risk of damage. Also, 6000 bridges of India were regarded structurally unsafe.

Kolkata Bridge Collapse: Where does the problem lie?

The major problem is the bridges like any other commodity require proper maintenance from time to time to avoid damage. It is immense need of audit too. But the concerned officials have been ignoring this problem. All the concerned officials are really concerned about are the tenders for new bridges. This should be reported as the old ones still need a lot of attention.

After the horrifying incident of Majerhat bridge collapse, images of crack in bridge near Axis Mall, Rajarhat have spring up. Also, Howrah Bridge is being considered in the danger zone and reports are that it requires maintenance to avoid collapse.

Where is everything heading to? What does the future holds? Another bridge falling or the awakening of officials? No one knows.

Tags: Kolkata Bridge CollapseWhat is the problem of bridges in India