The Indian team proved yet another time that why they are called as one of the best T20 playing nations. The India’s tour to England has three T20, five tests and three ODI matches to be played which started on 3rd July and will continue till 1st September 2018.

As of now, India has won the 3 T20 match series, 2-1 where Rohit Sharma and KL Rahul starred and scored centuries to make a mark and prove why they are one of the best T20 players. India will also be playing a first-class match against Essex during the tour at Chelmsford.

The T20 Series between India and England: Match by Match

The first T20s took place on 3rd July 2018 at Old Trafford, Manchester. Right from the starting, India had taken the lead against England. It wouldn’t be wrong to say that the Indian batsmen played well. The bowlers were no less. Nevertheless, England gave a tough competition as well.

In the first Ind vs Eng T20 match, KL Rahul overshadowed everyone. KL Rahul scored 101 runs from just 54 balls. England scored 159 runs loosing eight wickets and India chased the target of 160 runs and managed to score 163 at two wickets. Virat finished off just the Dhoni way, with a six in 18.4 overs. 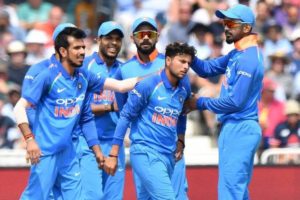 The second match of the T20s proved to be quite a hard time for India. It was held on the 7th July. England beat India by five wickets. While England managed to score 149 of 19.4 overs at five wickets, India got bowled off at 20 overs for 148 runs. Thus, just for one single run, India had lost a match which could have been a major win. Nonetheless, the start of the match stood to be Alex Hales.

Though Kuldeep Yadav and Yuzvendra Chahal tried to give a tough competition, this time England overpowered them. Virat Kohli and MS Dhoni tried their best, but it was of no use. Hales stood as the backbone to the England team. Thus, the 2nd T20s ended with England and India as 1-1.

The third match of the T20s was the most crucial one. It was the deciding one. The third match of the ODI happened on 8th July 2018. India emerged victorious in the match by taking a lead of 7 wickets. While England scored 198/9 at 20 overs, India managed to score 201/3 for just 18.4 overs. Rohit Sharma outshined everybody. The magic worked out, and he came out with a flying 100. The century of Rohit Sharma and Virat’s 43 helped India get the match to win. Virat also admitted to the fact that Hardik Pandya and Rohit Sharma were the stars of the 3rd T20 match. Nonetheless, England’s Jason Ray and Joss Butler gave off tough competition.

The Third T20 ended with India and England as 2-1. Thus, India beat England in the T20s. Now, the ODI will be beginning between the teams from July 12th. Now it is to see which team will overpower whom in the ODIs.