Seemed like Ishant Sharma rocked the Day 1 of the 5th Test Match between India and England. Ishant Sharma took  three wickets and hindered England from going any further of 198. By their end England stood at 198 by 7 at stumps. Alastair Cook, stood out to be the star of the match with scoring half-century in the last match of his career.

Ishant Sharma (3/28) took three wickers and Jasprit Bumrah (2/41) and Ravindra Jadeja (2/57) took two wickets each. All this contributed to the immense loss of England on the first day of the 5th Test Match.

India vs England Test Match: Performance of the English

Cook, 33, will take retirement from International Cricket after the Test. He was successful in delivering 71 runs for 190 balls. It proved to be a great start for England but soon England lost six wickets in 58 runs. From 133-1 it landed at 181-7. England was going quite strong but Bumrah took wickets for Cook and Joe Root (0) in the successive balls of the 64th over. Then Ishant Sharma came in to dismiss Jonny Bairstow (0). England then landed at 134-4.

Moeen Ali tried to bring back England to the path by 50 in 170 balls but it seemed Ishant didn’t want it to. He took two wickets for three balls in the 83rd over. As a result, England was lying at 181-7.

However, out of all, Mohammed Shami seemed to be a little disturbed and unlucky. He couldn’t even take one wicket which came as a surprise to everybody.

After tea session, Bumrah and Ishant returned to get back what they deserved. And undoubtedly, they succeeded in doing so. Cook being knocked out brought the collapse. Cook scored 73 with Ali. However, Bumrah knocked off Cook in the 64th over. Later, Bumrah knocked off Joe Root with a duck. And, the decision from DRS came in favour of India.

When Sharma kicked off Bairstow, England stood at three wickets for nine balls. It seemed to be relieving for the keeper, Rishabh Pant who scored extremely well in the match.

In the fifth wicket, Been Stokes and Ali managed to score 37 runs but eventually downfall was brought. Ali managed to put on his 13th half-century in the interim of 167 balls.

When Stokes got knocked off at 78th over, Jadeja came to the play. Although Ali played and missed, he managed to get over Sharma in the 83rd over. Shami bowled a great one,but Koss Buttler and Adil Rashid survived the game.

However, tough times began for India after lunch. The players were on the run to get over the batsmen and could have managed to do so.

In the 31st over, Ajinkya Rahane got hold of Cook at Sharma. Ali managed to survive the lbw in the 33rd over from Bumrah. Even the DRS appeal from India’s side was turned down.

In the complete series, India is already at the lead with 3-1. It won in Birmingham, South Hampton and Lord’s. India managed to win over Nottingham. 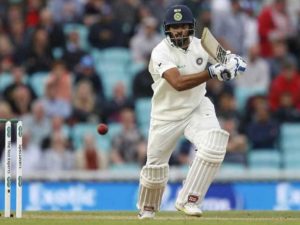 It wasn’t anytime soon, India was struggling to score over 175 for six, while England managed to have the upperhand. On the second match of the final test March India deemed to be on the lower side.

England managed to score a decent run in the initial beginning because of the 98 runs scored by Jos Buttler in association with Stuart Broad (38). Although in the first day, England was struggling at 198, in the second day itself in the first innings England was soaring high at 332.

One of the major drawbacks were given by the batsmen of India. Shikhar Dhawan, one of the major players of the Indian cricket team turned to disappoint the team. He fell short and managed to score only 3. It may be his last test innings for a time.

Hanuma Vihari managed to score 25 and Ravindra Jadeja at 8 wasn’t out too. But the duo didn’t manage to score too well as India lost the way after tea.

It seemed that Rahul would score out great but Curran did not let it happen. In the 23rd over, it almost seemed unbelievable to Rahul deliver.

India had a tough time scoring and had lose 3 wickets for 33 runs. It was Anderson who brought doom over the country players. Anderson knocked off Pujara as well as Ajinkya Rahane. Within a gap of thirteen balls, both Pujara and Rahane were lagging behind. Rahane however did not manage to score even one and was knocked off at 0.

But compared to the previous matches, Virat Kohli too came up to score a great deal. Kohli was in complete positive mood and wanted to take the revenge of the troubled Indian team. In the 70 ball knock, Kohli managed to hit six boundaries. He made batting appear smooth even when the team was struggling to score well.

Kohli tried to score well and managed to do so. Vihari however seemed to be a little out of sports with the coming in Stuart Broad’s inswingers. Broads had managed to get two LBW shouts against him. Vihari, however, managed to continue and fight till the end of the game.

The young wicket-keeper, Rishabh Pant too could not do well in the match. Although it appeared that there was no chance, Pujara managed to score well. Pujara survived LBWs. On the second day, while England stood at great 332/10, India