Highest Partnership for each wicket in ODIs for India

It will not be wrong to say that India is the best ODI team in the world today, they have two World Cup to their name and two Champions trophy triumph as well. They are also on the top of the ICC world ranking in ODI, also the top ranked batsmen is the Indian Skipper Virat Kohli and the top ranked Bowler is the death bowling specialist Jasprit Bumrah.

These stats self-speak for the dominance of Men in Blue in ODIs, but for success in ODIs the most important thing is to build Partnerships in the middle. So today we will have a look at the highest partnership for India in ODIs for each wicket:

This is probably the best opening duo for India and have multiple record to their name, the duo put on this partnership against the Kenya in a triangular series where Sourav Ganguly scored 111 and the master blaster was dismissed for 146.

This partnership between the master blaster and the wall was one of the best as they both scored 150+ score at Hyderabad in 1999 against the kiwis. Dravid was dismissed at 153 but Sachin Tendulkar managed to play till end at was unbeaten at 186. This was the highest partnership in ODI history until 2015 where Samuels and Gayle scored 372 against Zimbabwe.

This was the very emotional match for master blaster as he just came after the funeral of his father in the 1999 world cup against Kenya. India suffered a lost against Zimbabwe in the earlier match, but the duo put on the unbeaten 237 run stand in which Sachin scored 101 ball 140 and Dravid scored 104.

The two of India’s greatest middle order batsmen added 275 against Zimbabwe at Cuttack during the 5th match of the 1998 Pepsi Triangular Series. Azharuddin scored 153 and was judged man of the match whereas Jadeja scored 116. 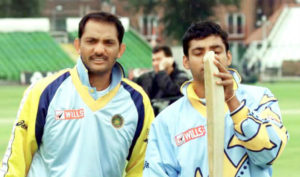 The duo is yet again in the partnership this time for the 5th wicket against the lankans at Colombo in 1997. The duo managed to score 223 runs together as Jadeja was dismissed for 119 while azaharuddin was unbeaten at 111.

This would be the most shocking duo to feature in this list, this partnership took place when an under-strength Indian side led by Ajinkya Rahane, toured Zimbabwe. India were 87/5 when the duo started their inning together and put india to respectable total Raydu scored unbeaten 124 while Binny managed to score 77. 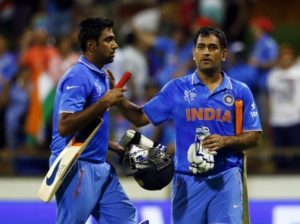 One of the greatest finisher in World Cricket MS Dhoni also features in our list as he sticked with Ashwin and added 125 run together against the arch rivals Pakistan at Chennai in 2012. The top order collapsed as India were 29/5. Dhoni scored unbeaten 113 while Ashwin provided the support with 31 from 39 balls.

MS Dhoni is the best batsman to bat with the tail enders, this time he added 100 runs alongwith Bhuvneshwar Kumar who had the upper hand in the 100-run stand that helped India to snatch the win from Lankans at Pallekele in the 2nd ODI of the 5-match series in 2017. Bhuvneshwar scored his maiden half century (53*) and Dhoni was just the anchor in the innings with 45 from 68 balls.

This was one of the most remarkable innings in cricket history. India was in big trouble in 1983 world cup as they were 17/5 but Kapil Dev had other plans, he scored 175 of just 138 balls in which he scored 16 fours and 6 biggies. Kirmani just scored 24 runs off 126 stand between them.

India’s last wicket partnership came during India’s tour of England in 2004 2nd ODI of the three-match series. India were 173/9 while chasing 308 for victory, when the unlikely duo of Harbhajan and Balaji stuck together and managed to score 64 runs together in which Harbhajan was the aggressor and he scored 41 off 39 balls while Balaji managed to score 18 before he was dismissed by Flintoff.