Farmers march to Azad Ground in midnight to avoid troubling students appearing for exams; Twitteratis call it being “Responsible Citizen”

Farmers shout slogans against the government at a rally organised by All India Kisan Sabha (AIKS) in Mumbai, India March 12, 2018. REUTERS/Danish Siddiqui

Ten thousand farmers entered Mumbai on Sunday after marching for 180 kilometres from Nashik from the past six days. Their feet were blazing and injured and injured after walking so long in the scorching heat of the Sun. Within few moments, there was a sea of red on the roads of Mumbai.

Reports have stated that within a day the number of farmers increased from 35000 to 55000. The farmers reached Sion on Sunday and were to march towards Azad Maidan on Monday morning. However, they were aware that their marching towards the destination would create a huge traffic and students appearing for their exams would be troubled, hence the organisers decided that the farmers would march during midnight.

All India Kisan Sabha tweeted, “Kisan Long March will march at midnight from Sion to Azad Maidan. This is to avoid inconvenience to the students attending board exams tomorrow.” The tweeted also addressed to AIKS President Comrade Ashok Dhawale and tweeted, “We do not want to put SSC students in any trouble. But we will reach Azad Maidan. Therefore, we have decided to start walking past midnight.” 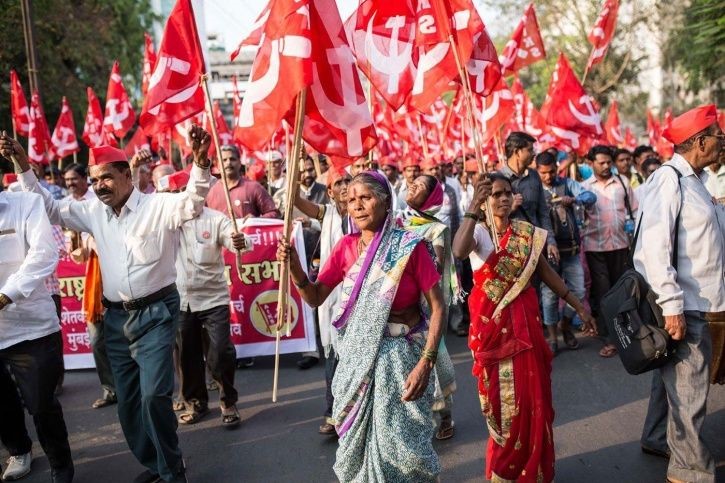 The farmers were waiting at the Somaiya ground and left foe their march exactly at 1 am. The buses that were provided for the comfort of the senior citizens weren’t used by them. Even the women did not board the bus to reach Azad Maidan. Rather all of them chose to walk towards their destination. They reached their destination at 5 am. Not only were people supporting this Farmer Long March, most of them also put some efforts in order to help the farmers.

After this decision of the farmers, most of the people took to Twitter to extend their support and praise. Here are a following Tweets:

The official and verified account of CPIM took to Twitter to inform the people about the plan. Their tweet read, “Original plan of the #KisanLongMarch was to camp in Sion tonight and march to Vidhan Sabha tomorrow morning. But there are 10th board exams starting tomorrow and the Farmers are worried about inconveniencing the students. So, they are going to march tonight itself to Azad Maidan.”

Kamlesh Sutar also tweeted, “These #Farmers wl b marching in d  Midnight to avoid any inconvenience to your children who r appearing for board exams. Now B4 u question or abuse them, remembr, they too r fighting fr a better future of their children. #LongMarch #FarmersMarch #FarmersProtest #KisanLongMarch”

Ruchi Gupta tweeted, “Really moved by the #KisanLongMarch. It’s not easy for 30,000 people to come together, march 180 kms, in this disciplined manner. Requires will, commitment and perhaps some desperation.”

Twitter did not fail to appreciate the effort of the farmers to march during midnight in order to avoid the trouble due to traffic for students appearing for exams and called it being a responsible citizen.

The statement of the farmers

Babasaheb Bawiskar, part of the march told that he was ageing but has a long family to look after. The government has failed to support him over the past few years. He told The Times of India, “I have been ailing and am unsure how I will be able to take care of my family in the coming days.”

The blistered and the injured feet of the farmers did not stop them from marching towards their aim. As said by Ajit NAwale, member of the All India Kisan Sabha, the villagers were supplying all the required ration to the people who took part in the march. A villager of Bhiwandi said, “I can relate to the pain of the farmers as I see it on my husband’s face every year after a failed crop. We hope they seek a reply to all the hardships we have been facing over the last several years.”

Due to drought condition in the village, the farmers of Marathwad and Vidarbha region turned towards the government to help them. The historic loan waiver was announced on June 2017 by Chief Minister Fadnavis under the scheme of Chhatrapati Shivaji Maharaj Shetkari Sanman Yojana. CM said that Rs 34020 crore would be provided only to a particular category of farmers. But the Central Government refused to help the farmers and the state government had to look after the issue.