Storm Deirdre was to arrive in UK, causing a lot of havoc. It will be causing heavy snow storm, winds and will pose to be a life-threatening condition for the country. The winds were supposed to reach 80 mph by this weekend. The extreme disturbance was to be caused in the power lines and railway lines.

The Scandinavian life was at the threat of the storm which means the whole of Northern Britain was at risk due to the storm. This Nordic blast will be causing a great havoc in the Britain. 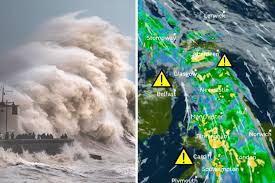 Owing to such bad weather conditions, the Met Office was forced to call out a Yellow Warning card. This threat was issued from 5am till the midnight back in Friday. As we the warning, the ‘deep depression’ was supposed to be moving from to the northern Scotland leading to extremely spread Gales.

The issued warning was, “Inland gusts of 50-60 mph are likely quite widely, with gusts of 70-80 mph in exposed locations across northwest Scotland. Heavy rainfall may be an additional hazard across parts of northern and western Scotland.”

This storm however seems to have become a damage for the travellers. As per the warnings, the travellers were said to prepare for a longer journey apart from their plan. They were asked to do so because they had been told they will be under the great risk of delayed journeys. All of this was going to happen due to blocked roads, railway along with the air and ferry services.

Storm Deirdre: Areas to be affected

The warning also stated that the buildings and large waves would be creating a havoc. Moreover, the possibilities of flying debris have also been suspected. The starting of this week is supposed to witness temperature close to freezing point due to the cold air flow from chilly North to the west of the region.

Midlands, South and East were supposed to witness icy spots owing to the light gush of wind along with severe conditions. However, it is the Northwest which will gradually suffer most difference in temperature. The mild showers in this region is supposed to turn to the cold air.

The higher parts such as mountains and hills are to experience snow. However, the lowers of the region will witness a disruptive sleet.

Storm Deirdre: Statement by the officials

One officer for the Met Office warned, “Showers may affect the north and east on Sunday, whilst in the south and west there may be some more persistent rain for a time.” Talking of the further weather conditions he said, “During the rest of this period some prolonged drier, settled but cold spells are likely, with lighter winds, especially early next week. Any wet and windy weather is more likely to be confined to the north and west.”

He further added about the consequences he added, “This will bring overnight frosts and perhaps fog, especially for the south and east, but also a chance of some snow in the north and west and possibly wintry showers in the east. Some unsettled milder spells are likely, more especially from late next week onwards.”

Sara Thornton, the Director of digital weather also added, “As the stormy weather clears away, colder air will sweep back in from the north at the weekend. Indeed next week sees an abrupt change to our early winter weather.”

UK is to be severely hit by the storm. Although the warnings have been issued, strict measures are likely to be taken once the people step in.