The main gas responsible for global warming is Carbon Dioxide. Now, this gas has risen up to the highest level of the history. It has reached 410 parts per million. It is the highest recorded since the past 800000 years as per the reports of Scripps Institute of Oceanography. Before Industrial Revolution occurred, the level of carbon dioxide were disrupted but it had never crossed the level of 300 parts per million.

A scientists of Scripps, Ralph Keeling, maintains the continuous record of atmospheric carbon dioxide of Earth said, “We keep burning fossil fuels. Carbon dioxide keeps building up in the air. It’s essentially as simple as that.” Ralph Keeling and his late father, Charles David Keeling had been keeping the records for the measurement of carbon dioxide in Mauna Loa Observatory of Hawaii since 1958. 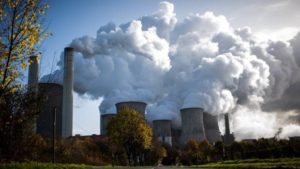 The climate scientist at Texas Tech University, Katherine Hayhoe on Thursday tweeted, “As a scientist, what concerns me the most is not that we have passed yet another round-number threshold but what this continued rise actually means: that we are continuing full speed ahead with an unprecedented experiment with our planet, the only home we have.”

Carbon dioxide is also termed as greenhouse gas because it traps solar radiation, and locks it in the atmosphere. It is one of the prominent greenhouse gases made by any human activity caused by burning of fossil fuels.

Climate change is becoming a problem because of the increase in gases like carbon dioxide, methane and nitrous oxide and is making “the planet more dangerous and inhospitable for future generations”, as per the reports of World Meteorological Organization.

Greenhouse effect is becoming a prevalent problem because of the increased level of gases like carbon dioxide and other such gases. This is improving the natural “greenhouse effect” of the Earth.

Back in the late 1800s of Industrial Revolution, the level of carbon dioxide were 280 parts per million (ppm). It was during this time that the level of greenhouse began to be released in large amounts because a large number of greenhouse gases were being burnt.

Greenhouse gases are being released by burning different oil, gas and coal. It also helps to make up a lot of energy. Gases such as methane and carbon dioxide are being produced. It is because of these gases that the temperature of Earth is rising. Such an increase in the gases has yet not being explained by natural variability.

Carbon dioxide is colourless, odourless and invisible. It is 63% responsible for increase the temperature and greenhouse gases as per NOAA’s Earth System Research Laboratory in Boulder, Colo.

The levels of carbon dioxide keep rising and falling and the highest recorded level was that of May. It may soon fall down as the plants would absorb the gas.