Recently, central Kabul has been struck by the coordinated double suicide bombing attack led by Islamic State group. Officials reported that in the attack, 25 people were dead which include nine Afghan journals. They also added that among the dead were an AFP photographer, one cameraman for local Tolo TV and reporters of Afghan branch of Radio Free Europe.

This is one of the latest attacks in the area with several bombings and assaults that has hit Kabul and some parts in Afghanistan in this recent year. Just a few hours after Kabul’s capital started to adjust with the attack, another suicide bombing happened in southern bombing of Kandahar. This attack killed 11 children as reported by the police spokesman. Eight soldiers of Romanian NATO also got wounded in the attack.

They Islamic State group posted on their Islamic State- affiliated website that two of their officials had attained martyrdom and they began the Kabul bombings. They targeted the headquarters of the Afghan Intelligence services.

The blasts occurred in area where headquarters of NATO are located, the Shash Dark area, various embassies and foreign offices and the Afghan Intelligence services. As per the report of one police spokesperson, Stanekzai, The first person to carry out suicide bombing was on a bike. The second attack was to happen when the victims of the first attack would try to seek help from the people, in the same area.

The second attack was walking, waiting amongst the reporters, who were moving here and there to get the news of the first attack and appeared as if he was a media person. Stanekzai added that the second suicide bomber took out his explosives and let it burst, targeting the explosives. 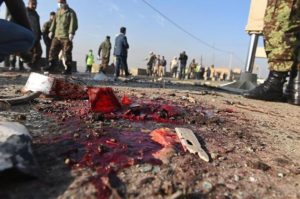 Agence France-Presse, a news agency said that their chief reporter from Kabul, Shah Marai also died in the attack. AFP added that Shah Marai was killed in the second attack, where the journalists were targeted who tried to move into the scene of first attack.

Media watchdog Reporters without Borders said that apart from the 9 killed journalists, six others were severely injured. Another statement came of only five reporters being wounded. This was said by the Afghan Journalist Safety Committee’s official, Sediquallah Tawhidi.

Another journalists based in Paris, who worked for the media organisations of several countrie said that the attack on Monday was one of the deadliest attack on the reporters after the fall of Taliban in 2001. The group also reported about 36 media officials being killed in Afghanistan by Taliban or the Islamic State. The group is famous by its French acronym, RSF. It has requested the Afghanistan government to ensure safety to its journalists.

Witnesses and survivors also informed about the horrific incident and gave their statements.

One of the witnesses, a 28 year old, Jawed Ghulam Sakhi recounted the incident and said, “when the explosion happened, everywhere was covered with dust and fire, it was such a horrific scene with dead bodies and broken parts thrown about on the street and the pavement.” The driver also added, “I saw journalists covered with blood, this time they targeted the media”.

Another witness was Masouda, a young woman was with her husband nearby the incident and blamed the authorities responsible for the attack. Due to the attack, her husband became injured and was immediately rushed to Wazir Akbar Khan hospital. She said, “I don’t know who is responsible for all these attacks, every day we lose our loved ones and no one in this government is taking responsibility for the killing of these innocent people.” 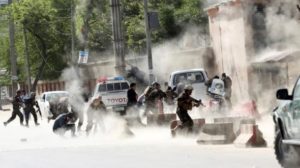 Suicide Bombing: Statements of the officials

The attacks were severely criticised by the Afghan President, Ashraf Ghani. The palace also gave statements saying that the attacks were targeted at innocent civilians, worshippers within the mosque, democratic and national process, reporters and freedom of speech. All of it includes within war crime.

The attack was criticised by US Embassy too, calling it the “savage bombings”. They extended their support to the Afghan people and government of Ghani to fight against terrorism.

They added, “We extend our deepest condolences to the families, friends, and colleagues of all the victims, including a number of brave journalists among the dead and injured where media are in danger, all other human rights are under greater threat.”

The police chief of Kabul, Dawood Amin reported that soon after the attack, the area was sealed and authorities started doing the investigation. The director of Wazir Akbar Khan Hospital, Mohammad Mousa Zahir said that all the injured people were being treated in the hospital.

The Afghan affiliate of Islamic State, also known as Khorasan, in its responsibility reported that the first suicide bomber had dropped all his explosives near the intelligence service in Central Kabul, making the officers to move towards the area of explosion. Their statement also indicated that the suicide bomber too gave up his explosives just after the first attacker. The statements which determined and stated the total death just like the militant claims, did not inform about the journalists being targeted and killed.

The NATO convoy was being targeted by the suicide bomber in the Kandahar, in the Daman district attack as reported by the Afghan official. Due to this attack, 11 children from a nearby school were being killed. Abdul Rahim Ayubi, the lawmaker from Kandahar reported that the children were in the NATO convoy to enjoy.

The deputy spokesperson of the provincial police chief, Matiullah Helal also said that in the attack 16 people were wounded. It included some soldiers of NATO, civilian and the policeman. Romania’s defence minister, Mihai Fifor also added that the Carpathian Eagles and Romanian troops were injured in the attack. The officials of NATO informed about their service members being recovered and were in a fine condition. They were rushed down to Kandahar Airfield’s hospital.

The commander of NATO’s Resolute Support Mission, General John Nicholson in a statement said, “if the enemies of Afghanistan think their cowardly actions will deter the commitment of the brave Afghan forces and our Resolute Support advisers, or the call by the Afghan people for peace, they are sorely mistaken.”

Monday witnessed yet another violence or attack in which four policemen were killed in the province of northern Balkh as said by the district chief f Nahri Shah, Sher Mohammad Abu-Tariq. The rebels had broken into their area, burnt the police vehicle and also fired RPGs.

In the explosion of eastern Nangarhar province, an Afghan police was killed while four people were injured. This was reported the provincial governor’s spokesperson, Attuhullah Khogynai. He also said that the main officer was the chief of criminal investigation units in the Behrud district. However, no one has taken the responsibility of the attack.

The IS affiliate in Afghanistan had originated just a few years before in Nangarhar. It then moved on to other places within the country.

IS and Taliban carried on with their frequent attacks. The Talibans attacked mostly the Afghan government and the IS members targeted the Shiite minorities whom they regard as apostates.

The continuous attacks underline the struggle of the Afghan security forces have manged to stay within the militant groups from the time that the United States and NATO stopped their battle mission at the end of 2014. IS as well as Taliban aims at developing strict Islamic rules in Afghanistan.

One of the suicide bombers of Taliban had killed 60 people in a voter registration centre at Kabul. This attack also wounded 130 people. 22 women and eight children died in the attack.

Yet another attack was targeted at Shiite shrine of Kabul, just a month earlier. The people had come there to celebrate the beginning of Persian New Year. In the attack, 31 people were killed while 65 people were injured.