Walking like an Army man, Dhoni receives his Padma Bhushan and also reveals his excitement

Former captain of Indian team, Mahendra Singh Dhoni, and multiple world-champion cueist Pankaj Advani on Monday received the third highest civilian order of the country, Padma Bhushan at Rashtrapati Bhavan from President, Ramnath Kovind. On being called upon, Dhoni received the honour on walking in his Lieutenant Colonel uniform and totally walked like an army personnel. 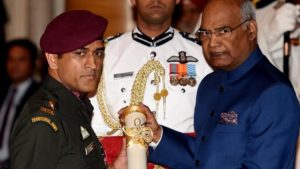 The honorary rank was bestowed upon the Captain a few months after Indian won its second World Cup under his leadership in November 1, 2011 by the Territorial Army. After Kapil Dev, Dhoni becomes the only person to have received this honour.

It is coincidental that exactly seven years after of lifting the world Cup for Indian on 2 April, 2011, Dhoni has received this honour of Padma Bhushan. Seven years before, India finally received the World Cup after 28 years, in the home ground of Wankhede Stadium. 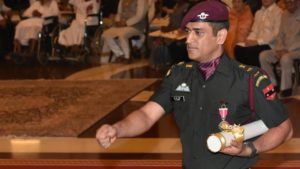 Sharing his excitement with his followers, Dhoni wrote in Instagram and shared a number of photos, “An honour to get the Padma Bhushan and receiving it in Uniform increases the excitement ten folds.thanks to all the Men and Women in Uniform and their families for the Sacrifices they make so that all of us could enjoy our Constitutional Rights. Jai Hind.” 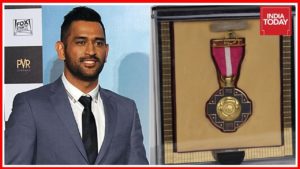 Dhoni has received a number of awards previously inclusive of ICC ODI Player of the Year award in 2008 and 2009 (the first player to have received the award twice). In 2007, he received the Rajiv Gandhi Khel Ratna award. He also won the fourth highest civilian order, Padma Shri back in 2009.