The health condition of the DMK President M Karunanidhi has been drooping since today and doctors are preparing to keep him under close watch. The politician was admitted to hospital back in 29th July, this year due to the increasing health problems. He had been admitted to Kauvery hospital in Chennai, but the doctors are struggling hard now to bring back his health into the stable condition.

Karunanidhi was admitted in the hospital in 31st July due to the sudden drop in blood pressure, which got fine after the medical treatments. Nevertheless, on the recommendation of the doctors, his stay in the hospital was extended. The doctors said that it was necessary to keep a track on the recovering health conditions. However, today it started falling.

The concern regarding deteriorating health

The doctors of Kauvery hospital have stated that they are finding it really difficult to keep up his health. Dr Aravindan Selvaraj from the hospital issued a bulletin where he briefly talked about the health condition of the DMK President. He said, “Maintaining his vital organ functions continues to remain a challenge considering his age-related ailments. His response to the medical interventions over the next 24 hours will determine the prognosis.” Nevertheless, the doctors are trying their complete effort to treat the previous Tamil Nadu chief minister.

As soon as the news of the declining health of Karunanidhi spread, all his followers began piling up outside the hospital praying for the health of the DMK President. His dedicated followers swarmed the hospital wailing and crying for the recovery of the politician. The media coverage even showed a number of people not being able to control their tears and crying excessively. 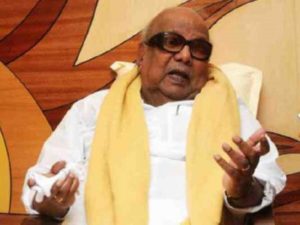 The visit of dignitaries

Tamil Nadu Congress Committee president S Thirunavukkarasar also visited the hospital to meet the DMK President in the afternoon. However, he informed the media that ever since morning, the health of Karunanidhi was falling. He said, “There was some setback in his health in the morning, after that it is improving. He is still under doctors’ observation and treatment. I pray to God for his speedy recovery.” The doctors are keeping the 94-year-old under close watch for the next 24 hours.

He was admitted to intensive care unit (ICU). Ever since the hospitalization, a number of dignitaries have visited the hospital to check upon his health. They included President Ramnath Kovind, Vice-President Venkaiah Naidu and Congress Chief Rahul Gandhi.

The reaction of common people on Karunanidhi

What has come as a bigger shock that since the hospitalization of the DMK veteran, 21 people have lost their lives. All of them were under severe shock due to the illness. DMK working President MK Stalin had observed the sudden death of all the workers and had urged everyone else not to undertake any severe measure due to the illness of the President. He has urged everyone to stay calm and pray for the recovery of the former DMK President.

On Monday, Karunanidhi’s wife had also visited to the hospital. She was brought on a wheelchair by their third son M K Tamilarasu. It was her first visit to the hospital ever since Karunanidhi had been admitted to hospital from 29th July.