Back on Friday, the cyclonic storm has crossed Tamil Nadu. The cyclonic storm has been named ‘Gaja’ and it has killed about 20 lives. The winds caused by the storm has resulted in severe massive destruction and has led to uprooting of several trees and electricity poles. These have further led to the destruction in Nagapattinam and Karaikal district. Other districts which were heavily destroyed due to the cyclone include Cuddalore, and Pudukottai. The cyclonic storm Gaja has crossed different places around Nagapattinam and reached Vedaranyam. It brought with it heavy rain, and led to damage in communication. It had also affected the power infrastructure of Nagapattinam. 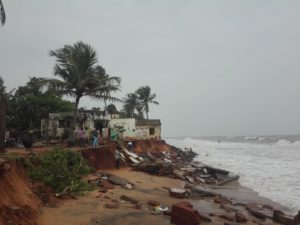 The reporters at Salem spoke to the Chief Minister, K Palaniswami said that they have taken up relief work. The concerned team will look into water-footing and further work are to be done. They added that the people who were affected will be given a donation of Rs 10 lakh from the Chief Minister’s Public Relief Fund (CMPRF). Nonetheless, people who have suffered from severe injury will get Rs 1 lakh each. However, those who survived the damage will be given ₹25,000 as relied. He further added that the fishing sector of Gaja was also severely affected.

As far as evacuation of the people were concerned, about 80000 people have been evacuated. All the areas from which the cyclonic storm has crossed on the early of Friday, saw the evacuation program. However, the storm did bring about heavy rain around the coastal region. The Central Government has assured that it will be helping the Tamil Nadu government to get out of the situation caused due to the cyclonic storm.

Home Minister, Rajnath Singh has asked the Home Secretary, Rajiv Gauba to keep a close watch on Tamil Nadu. He has also directed to help them in any kind of situation. Singh in a tweet wrote, ‘Spoke to CM Shri K Palaniswami regarding the situation in the cyclone affected areas of Tamil Nadu. Assured all possible assistance from the Centre in mitigating the situation arising due to cyclone. Asked the HS to monitor the situation & provide all help to the state admin (sic)’.

The detailed report regarding the damage will be sent to the Center by the Chennai government. The report read, “Chief Minister Palaniswami explained in detail the measures taken by the state government, the damage caused by ‘Gaja’, and the relief measures being taken up on a war-footing.” 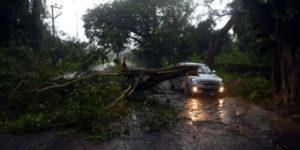 Cyclone Gaja: Reaction of the opposition

DMK President MK Stalin applauded the Tamil Nadu State Disaster Management Authority on its effort to manage the situation during cyclone. The appreciation has however come as a shock to many. Stalin tweeted regarding Tamil Nadu suffering damage due to the cyclone. However, this time it was the Gaja cyclone.

Stalin’s tweet read, “The way the @tnsdma (Tamil Nadu State Disaster Management Authority) took preparatory efforts (to tackle the cyclone) is praiseworthy.” Nonetheless he added that it is “necessary for the government machinery to act with the speed of a storm in taking up relief work.”

Stalin had attacked the AIADMK in 2015 during the floods for not taking the right measures to handle the situation. He also asked the men in his party to prepare and help during the relief operations.