CBSE re-examinations: Everything you need to know

Students and parents are under frustration as soon as the Central Board of Secondary Examinations announced the re-examination of Maths and Economics Paper on Wednesday over the issue of paper leak. The board has said that the examinations would be conducted “to uphold the sanctity of the Board Examinations and in the interest of the fairness to the students”. The Union education Secretary Anil Swarup also reported that the date of Class 12 Economics paper has been scheduled on 25th April but the date for the Class 10 Maths paper would be announced soon.

Mr Swarup added, “Regarding Class 10th re-examination – as leak was restricted to only Delhi and Haryana, if it at all a re-exam will happen, it will happen only in Delhi and Haryana and a decision will be taken on this in the next 15 days. If at all a re-exam is done, it will be held in July”. However, he added that the Non-Residential Indian or the NRI students wouldn’t be required to undergo the re-examination. 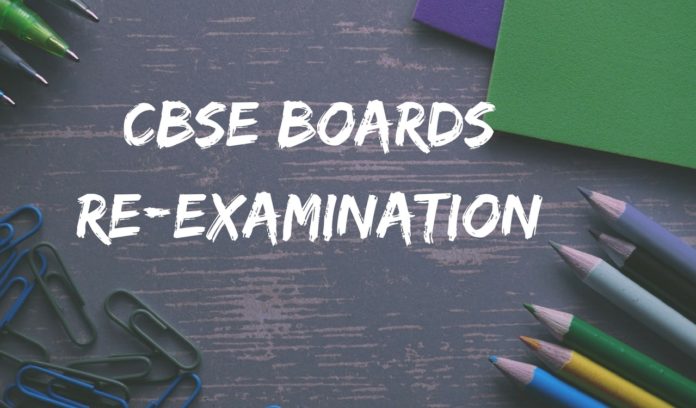 CBSE re-examinations: The price falling down

The students have also been protesting around Jantar Mantar in Delhi against the decision of re-examination. However, many people feel that other papers were leaked too. People of the crime branch said that other people who had access to the leaked papers were to charging Rs 35000. Some parents to cover the cost also sold the papers and in this process, the price of the paper fell from Rs 35000 to Rs 5000. The Crime branch of Delhi reported that nearly 1000 students had the leaked papers.

CBSE re-examinations: How was the paper leak?

As per the FIR, a fax was sent to CBSE last Friday and it stated that a man from Delhi who runs coaching centre had leaked the papers. Later on the fax was given to the police by CBSE.

The fax stated that the man named Vicky had leaked the people. He runs a coaching institute in Rajinder Nagar on West Bengal. The leaked paper was being circulated over WhatsApp just a day before examination. It was a hand-written question paper.

The reports further added that the leaked paper had the same questions as that of the questions presented in the original paper.

Prime Minister Narendra Modi was very displeased because of the paper leak. He also expressed his unhappiness and displeasure regarding the paper leak to HRD Minister Prakash Javadekar. He also said that strict actions should be taken against people who leaked the paper.

Mr Javadekar further said, “2-3 papers had been leaked on WhatsApp 30 minutes before the exams and we have made a complaint to the Delhi police regarding it.” He also added that government would take strict measures to ensure that no papers would be leaked in the future. He also ensured that the people involved in the paper leak would definitely be caught. He added, “Nobody has the right to play with the lives of children.”

The chief of CBSE, Anita Karwal added that decision for the re-examination of 2 papers for nearly 2 million students was taken for the sake of children. She added, “We are working for the children. We will also announce the dates very soon. Nobody needs to worry. We have taken a decision in favour of the children.”

A petition filed by Sree Charan states, “Many students have other plans for other events and some students families are looking to migrate from one place to another and have already begun their packing, hence, it makes it impossible for them to write their exam (sic)”.

The opposition parties had thrashed the government, whereas the Bollywood actors also expressed their displeasure regarding the paper leak.

The re-examination for Class 12 Economics paper will be held on 25th April, 2018 and the dates for the re-examination of Class 10 Maths paper would be announced as soon as the investigation has been completed.