The terms ‘comedy’ and ‘thriller’ are exactly opposite to each other. However, what is more attractive is that the movie Andhadhun is a thriller comedy. Hearing the name of the director itself, Sriram Raghavan has got everyone excited about the movie. His Badlapur was one of the best thrillers to watch for. The twists and turns that Badlapur had introduced in the movie market had raised the bar of expectations. This itself makes it clear that Raghavan’s movies are a must-watch. And with the tinge of Ayushmann Khurrana, the Netflix girl, Radhika Apte and Tabu, the movie is to leave you baffled. Andhadhun has just raised the bar of expectations for a thriller. Several critics, came forward to tell, this was Ayushmann’s best. No wonder the guy did wonders here.

The movie can be very much compared to those of the ancient times when two people tried hard to get rid of a dead body. Although the concept seems funny, there are a lot of scenes that are no less than a surprise to the audience. The film comprises of enough silence, random questions coming which are sure to take the audience back to the era of Chaplin or even Stan and Ollie. Andhadhun is sure a movie that is to keep you glued to your TV screens. This thriller gives you surprises even when you least expect it. Also, it is very engaging to grab all of your attention. 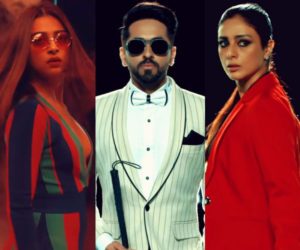 Ayushmann Khurrana plays the role of a blind pianist, Akash who gets himself involved in a murder. However is he completely involved? The audience knows who the criminal is and why the crime was done. Raghavan had brought the concept of dark side of people in his previous movies too like Ek Hasina Thi, Badlapur, Johnny Gaddar. Few of the characters of Andhadhun are immoral, corrupt and are continuously hiding something from each other.

The main focus of the story is Akash but at the same time, there are other things too which you should keep a note of. Anil Dhawan plays the role of Pramod Sinha, a hero from the bygone era when he was a superstar. He is immensely addicted to watching his superhits on the TV again and again. He wants his wife, Simi played by Tabu to do so too. However, she isn’t even a bit interested in his films. Radhika Apte plays Sophie, the love interest of Akash. Raghavan also has an excellent casting for supporting team. Raghavan has made sure that every character gets enough space in the screen no matter how minor the role is.

As it is said, one lie leads to other. Same happens in Andhadhun where one lie leads to other, one mistake leads to other, and one more crime is committed to hide the other. The series goes on. Raghavan and his co-writers despite having so many characters, have a strong control over them. Their actions have been so developed that it makes the plot appear large. The script of the movie contains a lot of dark humour. It is rich of comic timings where bad usually happens to the one who doesn’t deserve it. 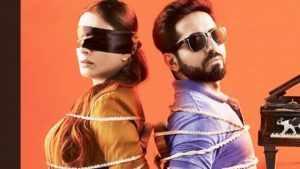 It is in the second half of the movie that it becomes a little boring. The unusual concepts of organ smuggling is introduced as a subplot. However, before it could carry away the attention of the audience with itself, the movie is brought back to its main focus. Eventually, the movie moves towards a proper climax point.

The movie has got some inspirational performances which holds the core value of the film. Manav Vij very rightfully portrays the role of a desperate cop who suspects that he won’t be able to get through. On the other hand, Ashwini Kalsekar has rightfully portrayed her role as an ‘hysterical’ wife. Radhika Apte very skillfully carries her role as a confused yet innocent lover. Anil Dhawan is rightfully seen as the actor boasting of himself but shows a sad side. But Ayushmann, he has completely baffled everyone. He got into the nerve of his character and it seemed so true. This was truly, one of the best performances by the star.

But who is the show stealer? It has to be the beautiful, Tabu. Her character, Simi is everything beautiful and thrilling. She has added up to the spice of the movie.

Raghavan’s thrillers have never failed to impress the audience. The movie brings back so much of the 70s eras. This comic thriller is a great movie which should be a must-watch. Also, the movie has received great reviews from c