Investigation regarding the sudden breakout of Escherichia Coli in 7 states have been started, by the health officials. It has already affected a number of people around the country. The Centers for Disease Control and Prevention has come in association with US Food and Drug Administration and U.S. Department of Agriculture’s Food Safety and Inspection Service and other states to determine the cause of sudden outbreak of E. Coli. In seven states the infections of E. Coli has already affected the 17 people. 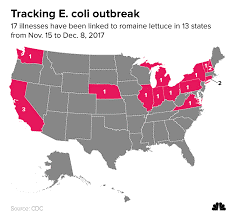 Owing to the infection, six people were hospitalized while one suffered from haemolytic uremic syndrome, one kind of kidney failure. People between the ages of 12-14 were affected the most as reported by CDC, the median age being 41. 65% of the women were victims to the E. Coli infection. However, no one died due to this.

Health officials have decided to conduct an interview with people about what they ate and where they visited before coming in contact with E. Coli.

The symptoms regarding E. Coli will surface from two to eight days after eating. The symptoms include serious stomach cramps, diarrhoea and vomiting.  Some people recovered within a week.