Recently released Ajay Devgn’s Raid is doing quite well in the box office, and is being much appreciated. This drama thriller of 2018 is impressing the audience with its storyline. Directed in a really serious motive, this movie deals with the serious issue of corruption. Not to forget, the star cast of the movie is strong too. The direction of the movie is impressive as well. It has received pretty good ratings and critical acclaim. Raid is a treat to watch because of the impressive visual appeal that it provides. Even the story line of the movie is pretty strong.

Cast of the movie 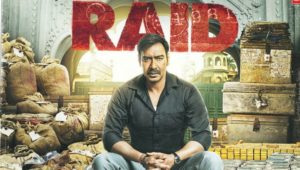 The movie released back in 16th March, 2018 and has a budget of 55 crore. The movie is produced by Abhishek Pathak, Bhushan Kumar and Krishan Kumar under the banner of T-Series and Panorama Studios.

The interesting fact of the movie that it comprises of some real life police as well as income tax officers.

The movie is set back in 80’s Lucknow, Uttar Pradesh. Ajay Devgn plays the role of an IT officer, who receives some information regarding the illegal belongings of the political leader, Tauji, played by Saurabh Shukla. Hence, the IT officer plans to raid the house of the corrupt officer and also his business.

Remarkably, the overall shooting of the movie was completed within a time span of three months. Raid is filled with heavy and impressive dialogues. The movie is full of twists and thrills. The movie is interesting enough to keep you intact to your seat as long as the movie continues. Not only Ajay Devgn plays his role with utmost honesty, and fights corruption, but also his team supports him. The audience gets an insight about the thrills regarding the gold biscuits and money popping out of the leader’s house.

Though the movie deals with a serious issue, but inclusion of music tracks makes the movie appear more of a commercial sort. Ajay Devgn is an honest public servant. Raid highlights the battle between Saurabh Shukla and Ajay Devgn. Saurabh challenges the officer that no one from the IT Department will be able to find a single penny and the fight for power starts. The hero doesn’t leave his truthfulness and the villain shows his power. The clash makes the movie more interesting.

Saurabh Shukla too has shown exceptional performance in the movie. His evil shade of character is commendable. Ajay Devgn’s dialogues too are filled with intensity which are delivered with complete ease. The supportive role of Ileana and Amit Sial too is something to be remarked. Pushpa Joshi plays the role of Tauji’s mother and the audience have appreciated her charm really well.

The direction of the movie is pretty impressive. Although it appears that the last 10 minutes of the movie to be a bit boring but the drama remains heightened. The music of the movie doesn’t really match it. It does raise the audience’s concern regarding black money and corruption.