Bigg Boss 11 Latest News: The Season of Fun and Controversies

Bigg boss 11, the name that sparks off the idea about craze and controversy in our mind. Ever since the release of Bigg Boss 11, it has been a talk around the town for all its controversies. Bigg Boss 11 was launched during the time of Gandhi Jayanti. If you have followed this season carefully then you know it was the season full of drama, emotions and fights. After Bigg Boss Season 4, in which Dolly Bindra participated, this season had shown the most number of controversies.

Bigg Boss 11 saw the introduction of “commoners” this time. It also introduced the concept of “padosi” (neighbours) this time. The following is the list of contestants in the Bigg Boss house:

These contestants have brought trouble to themselves since the first week itself. They have created all sorts of controversies and the poll is not liking it very much. Some say that this is the worst of all seasons. Shilpa Shinde and Vikas Gupta brought in their personal fight into the house and made it ugly. What made it uglier was Zubair Khan, but he was evicted in the first week itself. Arshi Khan, seems to be the Controversy queen. She has been into fight with almost everyone in the house. Hina Khan, has brought trouble to herself by giving statements that didn’t really go well with the other TV stars. All of them are trashing Hina for her mean comments. The love between Bandagi and Puneesh didn’t really go well with the audience. The poll slammed them for doing things, that shouldn’t have been done, in front of cameras. 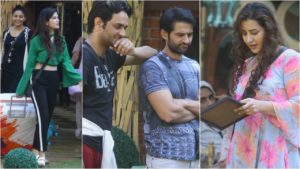 If this season saw a lot of controversies, it also saw many emotional moments. Vikas and Shilpa apologized and became friends. The trio of the house has been playing really well, Hina, Priyank and Luv. The growing closeness between Puneesh and Bandagi. The strong bond of love between Priyank and Vikas. The show saw a high rise in emotions when the family members and closed ones of the contestants entered the house.

The contestants who have been able to survive in this house are Luv Tyagi, Puneesh Sharma, Akash Dadlani, Hina khan, Shilpa Shinde, Vikas Gupta and Priyank Sharma.

However, people are anticipating that Vikas would take the trophy home. This is so because he is playing the game really well with his strategies.