Aiyaary is an Indian thriller film which is directed by Neeraj Pandey. The film is all set to release on the Republic Day of India, 26th January 2018. The poster of the movie has all the significant details that one should expect out of a Neeraj Pandey film, the first look of movie was released in Vijay Diwas.

Describing the movie director Neeraj Pandey stated “Aiyarry has been a special project with a very exciting ensemble”. Explaining the meaning of the title the director further added “it means ultimate trickery”. However it was postponed because of the much anticipated release of robot 2.0 by Rajinikanth and Akshay.

The story of movie revolves around the life of two soldier. They are Indian Army officers one is a mentor while the other is a protégé. However, the complete plot line of the movie isn’t revealed. It will be the young Army man’s fight against corruption. Both the men will be contradicting Each Other. They both are correct in their own ways but one just doesn’t wish to accept others authority. This thriller revolves around one’s dedication towards Nation. The movie will definitely be a treat to watch the movie will serve everything that you wish to see as per the trailer. 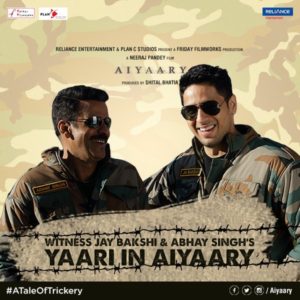 The movie definitely has a strong cast the cast and roles of the starrers are as follows:-

According to reports Sidharth Malhotra give a statement that it was a pleasure for him to work with Neeraj Pandey. Manoj Bajpai also shared his wonderful experience of a movie like Aiyaary.

While the nation is all set to welcome New Year, 2018 will experience some really mind wrenching movies. Aiyaary is one of them. This movie is all set to release in Republic Day and has already gathered a lot of buzz for itself Twitter is already going Gaga over the strong plot line and the characters of the movie.

The hashtag #AIYARRY has already been trending on twitter. While some are making memes some are really busy praising the acting that they got to witness from the trailer. 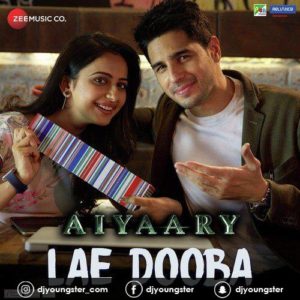 The trailer of the movie was released back in 19th December 2017 and has already get about 12 million views till date which is a huge number.

The first song from movie was released in December 28, 2017. It is a Love Song “Lae Dooba”, sung by Sunidhi Chauhan. It shows the chemistry between Rakul Preet Singh and Siddharth Malhotra. The song has gained 4.7 million in YouTube people in Twitter and all other social are completely praising the song.

Aiyaary based on true incidents. While Sidharth Malhotra feels proud to wear the uniform and share the experience for the goes on to add that he feels fortunate that he would be telling the story of Kargil martyr Vikram Batra. The expected opening range of the movie is 6 – 6.50 crore.

The movie will be clashing with Akshay Kumar started Padman. However, it would be great to see how the movie performs in box office.