It has been two days since Hawaii has witnessed an eruption of volcano. Though the eruption occurred two days ago, the tremors are still being felt by the victims. They are also feeling the ‘triple whammy of threats’. Lava came up from beneath through the fissures which opened on the ground. From there, it started flowing towards the eastern part of the island.

After the eruption of Kilauea, several such earthquakes have struck Hawaii. This still remains the strongest one to struck Hawaii in the last four decades. It had a severe impact on the residents of the place ever since they tried to evacuate. The fumes of volcano eruption are still prevalent on the air. These fumes could pose a great threat to the human health. 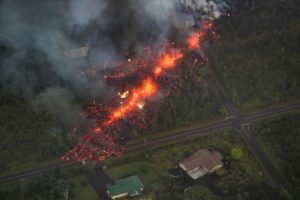 The first eruption happened in Kilauea on Thursday and from then lava started flowing to the ground and covered the whole sky with steam. The sky was covered with ash on the eastern side of the islands. The officials instructed the residents to escape the fires as there were “extremely high levels of dangerous” sulphur dioxide gas.

After that the reports of ‘active volcanic fountaining’ started flowing. The molten rock of shooting began from 80 to 100 feet in the air from the fractures of ground in the Leilani Estate. It is a subdivision of the eastern part of the Island, Puna district full of wooden homes with lush and tropical plant-filled lots.

On Saturday morning, the breaking out seven last fissures was also reported. One such fissure had also opened in the early Saturday morning. This was reported by Hawaii County Civil Defense Agency. The officials also said that more such breakouts may occur along the rift zone.

One of the drone footages had shown lava flowing out through the fissures and moving towards the homes of Leilani Estates crossing the lines of trees. Hawaii News Now also reported that due to these lave, two homes were burnt. In Leilani estate about 1700 people reside.

Though the island shook quite a number of times after the eruption on Thursday, it mostly shook severely on the midday of Friday. The southern part of the volcano was struck by a quake of 5.6 magnitude at 11:30 am. Just after an hour, again one quake of magnitude trembled the area as reported by the U.S. geological Survey.

The second hit was felt quite far near Oahu. It struck the same place where the deadly earthquake of 7.4 magnitude had struck in 1975. This, too was reported by Geological Survey.

Soon after the quake, social media became flooded by videos and homes. There were videos of shaking homes, items at the supermarket shaking and waves on the swimming pool as the earthquake of 6.9 magnitude hitting the Big Island on Friday afternoon. 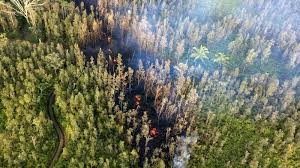 Hawaii Earthquake: Statement of the victims

One of the victims, Cori Chong, described the incident when she was at the room with her pet dog, Monty. The earthquake frightened both of them. Though her house is at Hamakua coast, one hour away from the north of the epicentre of earth, she felt the tremors of the quake. The earthquake shook her home violently and moved the glasses and forcing them to shatter. She said, “I think the whole island felt it”.

David Burlingame, lives two miles away from the west of Leilani Estates said The Washington Post said as soon as it happened he and his friend ran outside the house “and watched my house just shake back and forth”.

Burlingame also informed about the earthquakes and the continuous lava. He told, “Everybody is kind of on edge”. He further added, “The worst part is kind of waiting to see, because you really never can tell what can happen.”

Due to the earthquakes, the Hawaii Volcanoes National Park had to be closed as some of the park trails, craters and roads were damaged. With the first earthquake, a cliff collapsed into the ocean and suddenly the fissures appeared on the ground of Jaggar Museum. The officials also added that the hikes were cancelled on Friday and 2600 people had to be brought out of the park. The non-emergency employees also had to be brought out.

Cindy Orlando the park superintendent in one of the statements said, “Safety is our main priority at Hawai’i Volcanoes National Park, and it is currently not safe to be here. We will monitor the situation closely, and reopen when it is safe to do so.”

The agency of civil county defense also added that the risk of tsunami because of the earthquake would be low. However, no clarification about the safety by the agency. The administrator of the agency, Talmadge Magno said, “Everything is still elevated. It kind of gets you nervous”.

Because of the prevalent eruptions of the Thursday, Wil Okabe, the acting mayor of the County of Hawaii declared an emergency stement. The emergency proclamations were also issued by Gov. David Ige (D). He also activated the National Guard Help of Hawaii to help the people in evacuation.

The Big Island Realtor, Jordan Sonner also shared the experience. She talked that she was on the opposite side of the island and taking pictures for the list of Thursday and she “got the call that there was lava in Leilani” and had to rush back home outside the Leilani estates.

Sonner told The Post, “To describe it in a single word: chaos”. She further added, “My immediate threat was not the lava. It was the sulfur dioxide gas.”

Sonner reached home after one and a half hour and got all her essential documents and pets, four dogs and a chinchilla and had to move out there. Currently she is living with a friend at Mountain View, 200 miles away from the northwest of Leilani estates. She hopes that she and the other residents would take some time to return back.

Sonner added, “It’s so hard to tell what is going to happen because it’s just so early. This volcano being a shield volcano, the way that it erupts, it just erupts slowly.” She also added, “We kind of just have to sit and wait to see what direction the lava is going to flow in and what other fissures are going to open up. This is far from over.”

Sonner was quite scared to talk about losing her home and also described about the uniqueness of the community. Referring to the volcano goddess in Hawaii she added “The way I kind of look at it is, the land doesn’t really belong to us. It belongs to Pele. We get to live on it while we can and if she wants it back, she’ll take it. I have good insurance.”

Till Friday, many people were evacuated from their house at Leilani estate and the nearby Lanipuna Gardens. The residents had to take refuge at the Local churches, Red Cross shelters and the family and friends along the different areas of Hawaii as reported by Rep. Tulsi Gabbard (D-Hawaii).

Hawaii Earthquake: Statement of the officials

Gabbard also warned that these sulphur dioxide gas could pose some threat to the people and would be dangerous. It would be severe than the lavas which stopped due to the eruption. She also said that the people would not go to the affected neighbourhoods to help the other people.

She added, “Sulfur dioxide gas can be so toxic and thick in some areas that it can be fatal, especially to those who have respiratory illnesses. The wind can push [the gas] in different directions, so that’s a very serious concern given the high levels and, you know, people don’t necessarily have the kinds of protective gas masks that they would need if they were right in the thick of this gas.”

As per the reports of USGS, Kilauea is the most active and youngest volcano in Hawaii. The volcano erupted some hours after the earthquake of 5.0 magnitude had struck the island on Thursday morning. Sarah Kaplan of The Post also added that basalt is the main component of Kilauea. It is more a kind of effusive eruption rather than an explosive eruption.

The Kilauea forms a kind of broad, shallow dome kind of shield volcano because of the fluid rock. It is different from the steep, towering peaks of Krakatau of Indonesia and Mount St. Helens of Washington.

According to Tari Mattox, the geologist of Hawaii Volcano Observatory said “Shield volcanoes are really voluminous, the largest volcanoes on Earth, but because they have those long, low-angle slopes, they’re not very dramatic.”

According to the geologists, the seismic activities near the Puna look like the same incidents as that of the 1955 eruption as reported by Hawaii News Now. The effects of the eruption lasted about 3 months and about 4000 acres of land was covered by lava.

The district of Puna was once again threatened by the similar kind of incident in 2014 around the Pahoa and nearby regions as per the reports of The Washington Post. During that time, the lava flowed at a speed of 20 yards per hours and 60 buildings were at high risk.