Earlier, Amazon dropped off packages at your home, now it’s even more. It is dropping the parcels to trunk of your car. The subscribers of Amazon Prime who are users of Chevrolet, Bluck, GMC, Cadillac and Volvo with 2015 or newer vehicles, can get a standard shipping of their packages in one or two days. The in-car delivery will be started by the company in 37 cities which include, Houston, Chicago, Los Angeles and Washington DC Metro Area. 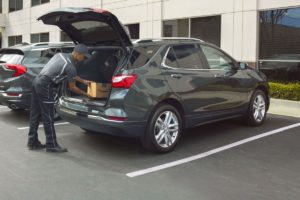 This strategy makes a significant part of the Amazon Key in-home which initiated from October 2017. According to the strategy, amazon could get access to your house by simply unlocking the door with smart keyless lock. The delivery personnel would then place the order within your home. The home security camera which is connected via Internet, also known at Amazon Cloud Cam will be checking on the entries as well as the exits.

The company came up with the idea to avoid the risk of door stoop theft. Though the progression was a great idea, many people still found it to be ‘creepy’. However, in-car delivery is still being considered as a safe option. It is so because you do not need to provide any special lock for Amazon to access you, like that of in home. It is also a safer option than leaving your car at the home.

In-car delivery can also be blocked till the time of delivery comes. Next, the package would be soon offered with the help of back-up method.

Amazon added that their customers can clearly mention about their requirements about the package, as in where they need it. The package may be delivered in trunk or passenger seat as specified by the customer. Therefore, it is not much a matter of any serious concern.

Cities like San Francisco, car break-ins are common, therefore, people may as well want to reconsider the option of in-car delivery. The spokesperson of Amazon, pointed towards their Amazon Key Happiness Guarantee, and said that if the product is broken or damaged because of delivery, they would put in efforts to correct it. The delivery drivers are also asked to inspect the surroundings of the car. If the delivery seems to be unsafe, it should not be made and switched to the backup option.

The functioning of the system is quite easy. In the Amazon Key App, you need to find to confirm about your vehicle and register your license plate number as well as the colour of the car. The app will then instruct you to place the car two blocks near the address on any street-level location which can be accessed by the public. However, the back-up delivery option is provided as well, so you must set that in too. It can include delivery in any building or access to the car once again the following day.

As per Rohit Shrivastava, the General Manager of Amazon Key, as soon as the driver reaches within ‘tens of feet’ for the journey, he will be able to track down the GPS location or even flash honk to get the proper routine. The drivers however need to verify the car before delivering any of the passages. They can verify and unlock the car using Amazon Key delivery app. The driver would not be able to proceed to the next journey till the door of the prior car has been locked by him.

Although the drivers have the facility to lock and unlock your door via Amazon Key App, the customer do not. They can only access their car using the apps connected to the car. Shrivastava also added that the car delivery apps or vehicle app communications are safe and encrypted. The customers also have the ability to block the in-car deliveries anytime they wish to. The Amazon app will also feature the time in which the car was unlocked and re-locked.