Bodies of more than 140 children were excavated from a site in Peru by the archaeologists. They believed that the kids were sacrificed to stop the heavy rainfall. The bodies were buried under mud. The skeletons were found from a site in Huanchaquito, Las Llamas. It is believed that the land was under the rule of Chimu Empire 550 years ago as said by National Geographic. The statement was published in a report issued on Thursday.

The researchers also added that children, both boys and girls between the ages of 5-14 were sacrificed by experts. The traits signify that the kids belonged to different ethnic groups who were brought from faraway places to the tribe of Chimu for sacrifice. One of the Peruvian archaeologists, Gabriel Prieto was involved in the excavation of an ancient temple in 2011. It was back then that he was first informed by people about the bones that they were seeing.

Therefore, Prieto reported to NPR Peru, “We started the excavation the same day. I remember in the first hour or two hours we found like 12 or 13 complete bodies and from there we knew we were in an important site and that we had to call other archaeologists because it was beyond our possibilities at the moment.”

It was discovered that the remains weren’t ordinary. The faces of the children were packed with red pigments, while the sternums had cuts and ribs were dislocated. All this indicated the fact that their hearts were removed. The bodies of other 200 victim llamas were also found by the excavators. It is believed that the llamas too were a victim to ritual killing. 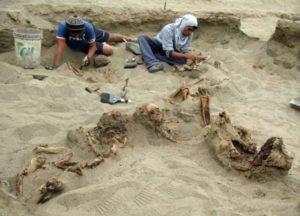 The conclusion to the theory was brought down to the excavators by the footprints of children (barefoot), women wearing sandals, llamas as well as dogs. All of these are etched in a layer of dried mud at the eastern area of 7500 square foot, the area which was excavated. It is also believed that the harsh, El Nino weather of tremendous rainfalls, led to the sacrifice of the children. Had it not been done, the weather would have destroyed the Chimu Empire that was built for facing arid situations. The infrastructure of Chimu empire had a huge network of canals.

Pierto added that the destruction would have been threating to the supreme powers. “Anything that would affect their economic or political stability, they would take advantage of whatever resources they had possibly to control this kind of situation.” This discovery has led the researchers to a great dilemma. Tom Dillehay, professor of anthropology at Vanderbilt University, has not worked on the project but told NPR about the prevalent ritual of human sacrifice at the Andes but “not at this intensity or scale”.

Like the researchers, he also said that the kids must have died due to the sacrifice. He said, “There is no other explanation for the accumulation of so many children. You could relate it to warfare and perhaps gathering up children — but why sacrifice so many animals as well?”

Nevertheless, he is a bit confused about the reason of their death and said many archaeologists and geologists’ are “trigger happy” concluding that the catastrophe must have been brought down by the El Nino. Talking about the mud, he said that there could have been a tsunami, “I think we need to be more cautious, unless they have solid geological evidence.” He further said, “If a highly localized event such as El Niño impacted the community, then why do you need to stretch out several hundred miles to bring children in?”

Another persona, Jonathan Haas, curator emeritus at The Field Museum disagreed to the facts. He informed the NPR from Peru, “The layer of mud indicates that it’s raining. And it never rains in the coast of Peru except during fairly traumatic El Niño events because the infrastructure was built for an arid region, “when it rains, it wipes out the entire agricultural system.” He also said that the huge number of sacrifice determined that the ancient society weren’t merciful. “It goes to show the power the rulers had to take children away from their parents and kill them. That’s a lot of state power.”

As Prieto added, the research will be continued with the help of DNA and biological analysis of the victims. All the evidences would be discovered, reviewed and published in the scientific journal as said by National Geographic.

This unnatural discovery has given a brief view of the history of Peru apart from the geoglyphs along the Nazca Lines and culture of the Incas presented by the Machu Pichu. Prieto also added, “Facing all these human remains and llama remains in very fragile conditions, surrounded by modern houses, it was really a feeling of responsibility that we were facing something important — that we need to record it in the best way possible to finally tell this story.”